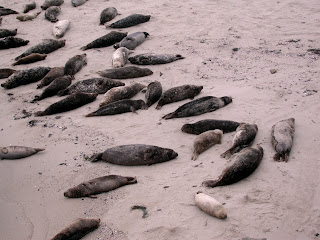 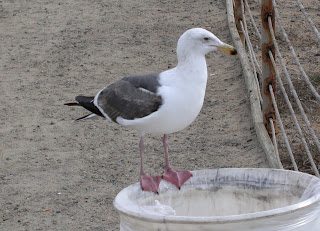 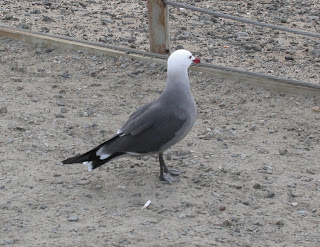 <-- Heerman's Gull Western Gull (above)
Dad and I made a quick weekend trip out to southern California a couple of weeks ago to pick up a car that my dad bought in San Diego. We were able to get an afternoon's worth of birding in on the southern CA coastline (mainly Point La Jolla in San Diego), major birding at the Salton Sea the next day, and then Tucson area including Madera Canyon the next. Saw many neat birds including 20-some life birds. A few of my favs were Yellow-footed Gull, Mountain Plover, Rufous-winged Sparrow (thanks to a tip from my friend Tom Prestby on the Broadway Ave "Desert"), Arizona Woodpecker, Painted Redstart, and Bridled Titmouse. I wasn't able to get too many photos as we were trying to cover as much ground as possible with our limited time. I've included some of my better ones, but they leave much to be desired. The frigid reality of life back in Grand Rapids, MI was none too pleasant upon my return when temps reached below zero for nearly an entire week...ridiculous!

Ecology of the Indian Tropics

I has the unbelievable opportunity to take a class in southern India this past January term and spent almost three weeks traveling all over the southern province of Tamil Nadu with 7 other students learning all about the ecology of south India. I was able to see a decent representation of many of the more common species there and ended up seeing close to 260 species during my stay (all but 15 of which were new for me). To view some photos I was able to take check out:
http://outdoors.webshots.com/album/556865958TmnAFT
Posted by Sean Fitzgerald at 2/24/2007 10:38:00 PM No comments: