In search of a Wisconsin rosy-finch!?

This morning Tom Prestby and I both made our first winter visit to Grant County in search of the wayward rosy-finch that apparently has decided that Wisconsin beats Colorado as a winter destination... It only took a couple of u-turns for possible crossbills in spruces before we did find some on the eastern edge of Finnemore in a small (less than 35' tall) clump of spruces in front of a small trailer park. The six crossbills were both our first in Grant County but it wasn't until I returned home that I noticed that the male, who had so cooperatively allowed me to digibin him from the car, actually appears to be injured. 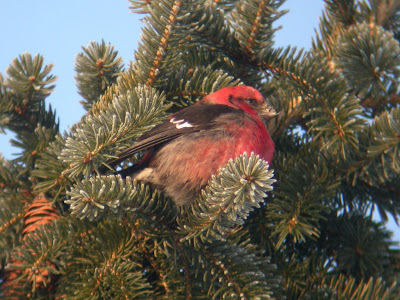 His upper mandible lacks the normal decurved tip and looks as if its beak is flaking (see photo above)... I'm not sure if this is the result of a collision with a window somewhere in southern Wisconsin or if this is inevitable as these guys get old.
Tom and I arrived at the guy's house who had originally posted the bird on eBird 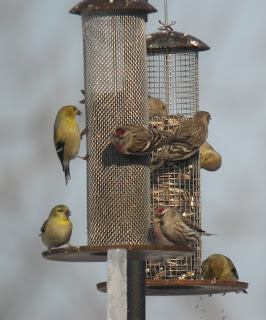 at 9AM and we settled in for the potentially long wait to see this bird come to their feeders. Shortly after we had arrived Chris West showed up, and over the course of the next 5 hour two other birders swung through (Aaron Holschbach and Tom Schaefer). While we struck out on the desired finch, we did see quite a diversity of other finches in his yard. Among these was a nice male Purple Finch, a few House Finches, good numbers of goldfinch, over 18 Pine Siskins, about a dozen Common Redpolls, and a flock of 15 White-winged Crossbills that briefly stopped to check out a small clump of conifers in the neighbors yard. 6 species of finch in the course of five hours in Grant County (furthest county SW in the state) - wow! Here is a photo of just a small glimpse into the almost constant finch buffet line that these guys had spread out (right).

After we left the rosy-finch location we headed down to Cassville and checked the John Dewey Powerplant in Cassville. The previously reported Trumpeter Swans (12) were still present along with 7 Bald Eagles, 2 Belted Kingfishers, and a good number of Common Goldeneye (45). Eastern Bluebirds were seen at 4-5 different locations within 5 miles of Cassville totaling at least 14 birds.

We headed next to Patch Grove where there had been some good recent reports. We found two different flocks of 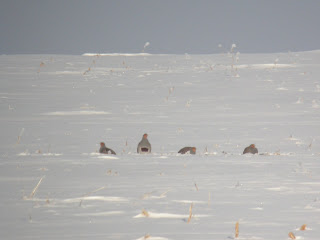 Gray Partridge totaling 18 birds on both the east and west sides of Breuer Rd (north of Lancaster Rd or Patch Grove Rd). Having only seen this particular species one time in Wisconsin, this was probably the highlight of the day for me (4 of the 18 pictured on the left). The windswept "snowscape" had an almost tundra-like feel to it (closing photo below). The partridge were digging down into the snow then using their feet to kick up the dirt presumably in search of corn or small seeds to eat. I have to give these birds props for being so hardy.
The large flock of 600+ Snow Buntings (with small numbers of accompanying Lapland Longspurs) reported by Dennis Kirschbaum was still present at the intersection of Hickory and Maine to the southwest of Patch Grove.

As we made our way back east we picked up a small group of 7 Brown-headed Cowbirds accompanying some starlings and house sparrows near a "messy farm" east of Preston.

We ended the day with 38 species in Grant County, not too bad for half the day spent staring at a feeding station! 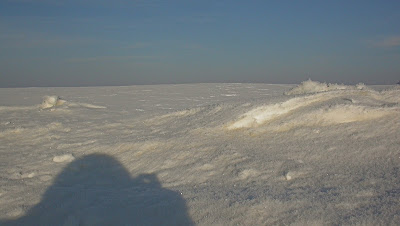 The End of a Season

I've been back in Wisconsin for over a month now, but I feel I should give some closure to the Cape May Seawatching experience. My final few weeks were decidedly colder than the rest of the season and some of the weather was a bit unpleasant to stand out in, but the birds continued to reward. The highlights of my final few w 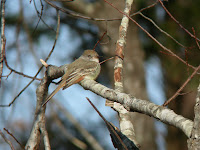 eeks included:
A non-waterbird highlight was a very cooperative Ash-throated Flycatcher that managed to stay put for almost a full week after being discovered before I could make it down to see the bird. The duties of the seawatcher don't lend themselves to breaking away for the latest rarity down at the point... It's pictured on 12/3 on the left.
A small flock of 4 Redhead mixed in with a larger flock of scaup on 12/5. This was my only observation of this species during my three months in Jersey.
Lone Harlequin Ducks on 12/5, 12/8, and 12/14 - all female type birds and only one of them was mixed in with any other species of duck, a pair of Red-breasted Mergansers.
Some pretty good movements of scoter considering how late in the season it was. My peak December count was over 11,000 scoters (mostly Black) on 12/6.
I had two days of triple figure White-winged Scoter movement as well (which is nothing for birders from Mass, but I'd never seen numbers like that moving before).
A couple of Red-necked Grebes were seen (including a count week bird for the Cape May Christmas Bird Count).
I also managed a very tardy young Brown Pelican on December 1st, 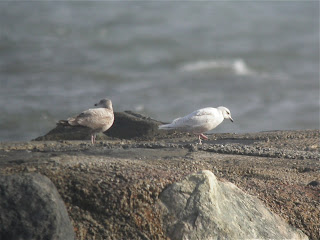 heading north remarkably enough! This was almost a month after my last prior sighting of this species.
A few of the "white-winged" gulls put in an appearance and they included two sightings of a young Iceland Gull (possibly the same bird twice - photo on right) as well as a 1st year Glaucous Gull. While not exactly stop press, a juvenile Lesser Black-backed Gull (photo below) discovered that I'd feed inquisitive european gulls and actually was a regular in the Avalon parking lot for a couple of weeks! It was a feisty bird, stealing bread from Herring Gulls and not letting them boss him around! Both Cameron Cox and Michael O'Brien spent a fair amount of time photographing this rarely seen plumage (at least in late fall in NJ) while I chummed the bird in for them. 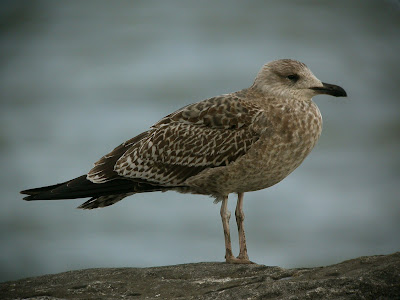 One more young Black-legged Kittiwake and an adult Little Gull were the only other gulls of note for the remainder of the season.
Always an exciting group, I had several days when I was lucky enough to spot small numbers of alcids moving past. The majority of these birds were Razorbills (10 of them in December including a new Cape May CBC record count of 7 on 12/14). A few of them were only "large alcid sp" as they were too far to identify with any sort of confidence. And last, but certainly not least (in a figurative sense), the highlight of the entire season for me, was a tiny Dovekie that zipped along the bar on literally my final scan of the season on 12/17! The tiny football-shaped projectile whizzing past on wings beating so fast you can barely see them was a sight to behold. Luckily this bird wasn't that far out, because any farther and I don't think there's any way I would notice such a small bird zipping right between the troughs... This didn't take the title of final bird of the project for me though, a flock of Snow Geese appeared overhead as I was packing up the scope. Still a nice finish to a very fun season!
The grand total of the entire season for 2008 was a very impressive 946,935 migrant waterbirds tallied as they winged their way past the 8th Street jetty in Avalon and down to more hospitable clines.
I definitely couldn't have spent an enjoyable season here without the many folks who kept me company, kept me well supplied with warm drinks and snacks, and helped me out on the major flight days. Many helped, but I want to especially thank Jon Kauffman, who did a terrific job not only being the interpretive naturalist and interacting with visitors, but also in spotting and counting birds when it got busy. Special thanks also go out to Gail Dwyer and Shaun Bamford for their constant company even on the "slow days", and also to Tony Leukering, Cameron Cox, Glenn Davis, Michael O'Brien, Sam Galick, and Clay Sutton for their assistance on the mega days and for their willingness to drop what they were doing to come help me out. It was an incredible season and I'm extremely honored to have been a part of a truly spectacular migration phenomenon.
Final photo of the season is of my visiting birding pal Tom Prestby at sunset overlooking the Meadows. 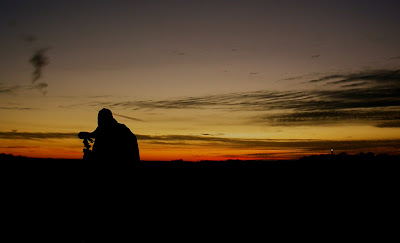