So I definitely haven't been keeping up to date on this blog. Part of the reason for this lies in the fact that I have to update Cape May Bird Observatory's blog every night detailing what I counted. This is during my already limited spare time, so this results in me not being overly eager to work on my own blog on my days off. That being said, a brief update is in order. I've definitely settled in and have gotten used to my parking lot 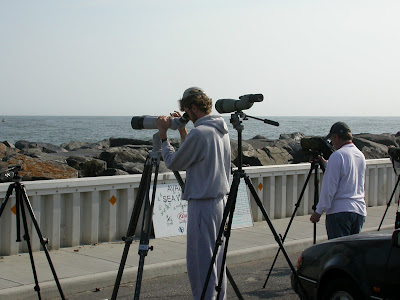 where I stand for 10+ hours five days a week in Avalon. The small town is about 30 minutes north of where I'm living down in Cape May with the other counters (down to 4 from 9 last month). I have to be out and counting at sunrise and I stay until sunset.
The count started out quite slow in September (less than a thousand migrating birds total each day). The notable highlight though was a close flyby Leach's Storm Petrel that was seen following 4 days of gale-like winds from the NE. This species is normally a pelagic species (open-ocean) that stays far from land. This was a life bird for me, and an unexpected one at that. Jon Kauffman (the naturalist who is at the seawatch on weekends with me) and I had great looks at the bird as it flew right past us and out to sea. This was actually the first time this species has been recorded in fifteen years of this sea watch being conducted, so it truly was a notable bird for this location and season. Other highlights during that period were mostly passerine in nature, with a surprising number of songbirds flying in off the ocean 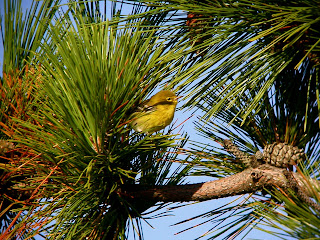 and landing in the four small Black Pines that are in a yard next to the parking lot (the only semblance of natural habitat for birds like this Pine Warbler, in the wall-to-wall 1.2 million dollar+ summer homes that Avalon is made up of). Among these interesting passerine were late Yellow-throated Warbler among 14 species of warblers total, Yellow-billed Cuckoo, Pine Siskins, and Dickcissel (just to name a few).
Big days at the count usually have me quickly on the phone to get some help down as the sheer volume of birds flying past is staggering. There have been several such days, where I've counted over 20,000 migrant waterbirds in a single hour! (90% of which were Black and Surf Scoter - linked photo by Tony Leukering who also happens to be pictured above with me)
This is truly a novel experience for me, and I'm grateful for the number of expert birders who are only a call away who can usually drop whatever they are doing to help out (these days typically come less than 4 or 5 times a season).
That's all for now, but I'll try to give you a few more updates as I finish up the last five weeks of the job.
Posted by Sean Fitzgerald at 10/23/2008 12:54:00 PM No comments: