I had the opportunity to accompany several of the hawk banders out to one of the sites where they band raptors here on Cape Island. This was actually my first time observing raptor banding, and it was a real treat watching them "flap" (a pulley system attached to a harnessed up pigeon or starling) and the response we would get from various species of hawk. 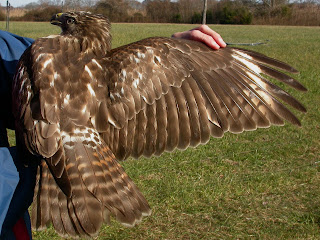 They caught three hawks during my two hours there, a pretty good total for this late in the season.
My favorite of the three was a young Red-shouldered Hawk that came seemingly out of nowhere (the back side of our blind) and was on top of the pigeon before we even realized! I even got to release this bird, which was also a pretty cool experience. In the photo you can see the pale window that is visible on young Red-shouldered's in the outer primaries (right).
The Red-tailed Hawk that we caught was also a young bird and I definitely have a lot of respect for raptor banders because I wasn't interested in tangling with one of these guys as they go onto their back with talons up as you go to extract them from the net... A majestic looking bird (below), I don't appreciate their aesthetic appeal as much as I probably should. 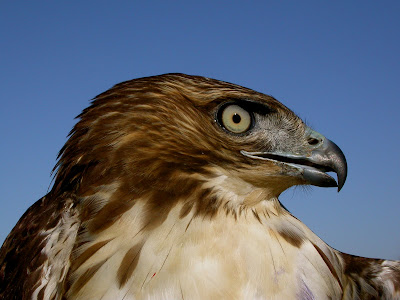 The other hawk they caught was a young male Cooper's Hawk that was interestingly missing several of its tail feathers (a close call with a Peregrine Falcon perhaps?). It was a really fun experience that gave me a further appreciation for a side of birding that I don't often see up close. Bonus birds near the blind were a late (wintering possibly?) Yellow-breasted Chat and a young Northern Goshawk that we observed a couple of times from the blind but that we were unable to lure into the nets...
Posted by Sean Fitzgerald at 11/28/2008 08:20:00 PM