Well, it's been a heck of a long time since I posted on this, but needless to say I've been extremely busy. Back in March during my spring break I was fortunate enough to be able to visit England and Scotland. Thanks to the expert advice and amazing hospitality of Gervase and Ann Orton as well as Torcuil Grant and his mother, I was able to see an amazing diversity of species over a short week that involved me flying into London Heathrow, taking a train out toward Norfolk, spending three days with the Orton's before taking a train up to Scotland to meet up with Torcuil.

The first three days we birded some of the best regions in England for waterbirds and we saw a good number of birders while we were out. I was fortunate to experience atypical March weather my entire time in the UK and it only rained once during my week there! The Norfolk area produced plenty of the typical birds as well as a few "rares" as the Brits like to call them (aka rarities for the US birders). Things like Dartford Warbler, Little Gull, and Red Kite were all seen.
Scotland was incredible and some of my highlights from there were Smew, Brambling, and Black Grouse (whiffed on all the Scottish specialty birds though...a definite reason to come back!).
A summary that I typed up is posted above...

The summer was spent in Grayling, MI leading the Kirtland's Warbler tours again for the USFWS/Michigan Audubon Society. I was able to make it over to Tawas Point State Park on Lake Huron for a few days and saw some good birds at that phenomenal site during my trips over there (summary above). 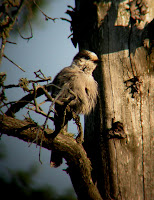 Grey Jay, and other boreal targets were all targeted.
I also found a Western Meadowlark at one of the Le Conte's Sparrow locations which is not nearly as common in MI as it is in WI. 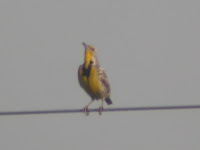 Following summer classes through the Au Sable Institute near Mancelona, Tom Prestby and I flew down to Tuscon and birded SE Arizona, the Salton Sea, and the southern CA coast during our week prior to classes starting up again. (summary below)

Once classes resumed I wasn't able to bird much. I literally was able to get out only a few times although I was fortunate enough to make a trip back to WI when the Green-breasted Mango showed up. Thanksgiving break I was able to bird a portion of a day and picked up the returning Mew Gull at South Metro piers in Oak Creek for the fifth consecutive year.

In the week preceding finals I was sitting in a Panera Bread shop studying and I looked out the window to see a large (~200) flock of Common Redpolls landing in the weedy field next to the parking lot. I hurried out to my car and pulled up right next to them. Among them was a very frosty male Hoary Redpoll - a long overdue life bird for me.

Last week I spent two days doing a winter trip to Niagara Falls, Ontario in search of gulls. Caleb Putnam typed up a very good summary so I will refer you to his blog for details on that trip. The King Eider that we refound was a long-time nemesis bird for me and was my only lifer of the trip. It was a subadult male, the only thing that could have been better would have been a full blown adult male...someday!

Above the falls, the sheer number of gulls can be partially seen in this photo as the seven species of gulls present at this particular location react to a subadult Bald Eagle flying over...
Posted by Sean Fitzgerald at 12/18/2007 07:28:00 PM