Here is my summary that I posted on MI-listers of a weekend I spent at Tawas back in May:
Yesterday afternoon and this morning were excellent at Tawas Point State Park (Iosco County).
Highlights of 5/23:
Whimbrel - 300+ located at tip of the point and only present until about 3:30PM when a young 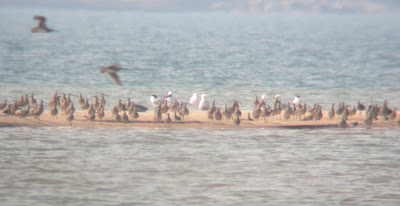 couple walked all the way out to the end of the point. The Whimbrel all took off and headed west over the bay. Jim Stevens reported seeing the birds from the McDonald's parking lot as the flew past at the same time.
Northern Mockingbird - seen briefly on my way out to the point 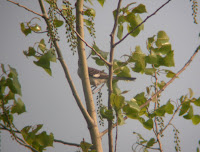 and observed again out at the tip flying out to the islands and back to the lighthouse. "Record shot" on right...
Yellow-breasted Chat - Heard about 200 yards in from the actual point and briefly observed near the stand of Jack Pine on the bay side of the point. 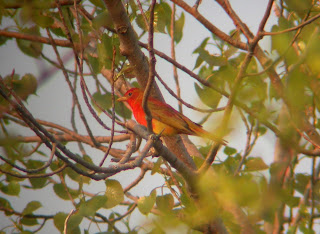 Other highlights:
21 warbler species for the two days (including 5 Mourning - 5/24 and Prothonotary on the morning of the 23rd that I didn't see), Yellow-bellied Flycatchers, Red-headed Woodpeckers, White-rumped Sandpiper, Black-bellied Plover (~50), American Wigeon, Merlin, and Philadelphia Vireos. I haven't totaled the species list for the two days, but it was my best two days ever at a migrant trap.


Two days later, a "Tropical Kingbird" was reported from Tawas in the afternoon and I dashed 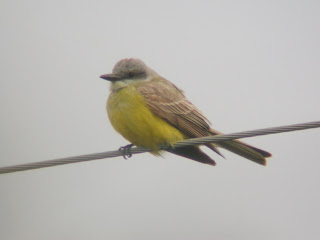 down there for what would have been a life bird. It turned out to be a much more regionally unexpected and rare Couch's Kingbird which I was able to enjoy with numerous other birders that evening. I also spotted an Eastern 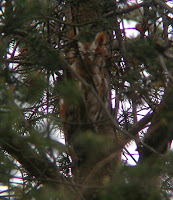 Screech-Owl roosting in the midst of one of the Jack Pines out towards the end of the point, apparently a very rare bird out on the point... This was also the first red morph ESOW I've personally observed.