I just arrived in the thriving town of Pullambadi, about 13 km from the Karaivetti Wildlife Sanctuary where I am going to be conducting a six-week bird survey which will be fulfilling my internship requirement for Cornerstone University’s Environmental Biology undergraduate program. I visited southern last January as part of an Au Sable class on the Ecology of the Indian Tropics. I had a great time and learned a lot but I was frustrated by the constraints of the class schedule which made it difficult for me to see many of the birds that were residents. At the end of the class last year, Dr. Relton invited me to return and conduct my internship here so I could spend more time really getting to know the local bird community. I would also be assisting them by conducting a survey of this wildlife sanctuary which has never been systematically surveyed for consecutive days (the most intensive survey it received was 5 years ago when it was visited ev

ery fifteen days during the winter season). 8,700 miles, 36 hours, and 3 airlines after departing from on January 27th, I ended up in Trichy (~35 km from where I’m conducting the survey... 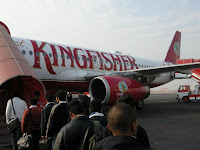 and how apt of an airline to be flying on my way to birdwatch in India!). A day and a half of recuperation and adjustment to the time zone difference (11.5 hours ahead of CST) and Relton drove me out to Pullambadi to where I will be staying with Mr. Devadass (the administrator of a primary school) and his family for the next six weeks. The moped that I will be driving ~13 km back and forth every morning to the sanctuary along “metaled” (asphalt) roads was shown to me and Relton and I set out to do a test run and for him to show me the route (comprehensive maps of the road system that we are accustomed to in the States don’t exist here…part of the fun!). The tripod for my scope presented the largest problem and I ended up holding it across my lap as I sat on the back of the moped as he drove. Luckily, only 3 km of the trip is actually on a road that has regular traffic (buses, trucks, and cars). The remaining 10 km or so only have motorcycles, mopeds, and ox-carts and is very quiet.

It took us 40 minutes to reach the far end of the lake, where I will start each morning so the sun is at my back (facilitating much better views and counts of the waterbirds that are present). Relton went over the survey method which consists of splitting the ~285 hectare lake into four sections and spending approximately 30 minutes observing and recording the numbers of each species of bird in each section. There is another smaller lake that is on my way from Pullambadi to Karaivetti Wildlife Sanctuary that I will also be surveying.

After visiting these two lakes, Relton and I were both left asking; Where are all the ducks?

Today when Relton and I went to scout the area we were both surprised by the lack of ducks that were present. When I was here last January the lake was literally covered in ducks with a large number of them being diving ducks like Tufted Duck and Common Pochard. Today not only were there very few birds (~400) but there wasn’t a single diving duck present. Large numbers were present just three weeks ago when Relton was last here, so where all of these birds have disappeared to is a mystery. Perhaps they have already left headed north for their breeding grounds in Siberia and . The water levels on the lake will steadily decrease as the river that feeds it dries up for the summer. Karaivetti is one of the deepest lakes in the area, and retains water the longest. As water levels drop many of the large waders (storks, ibis, spoonbills, and herons) as well as shorebirds concentrate here in much higher numbers. We didn’t spend too much time counting at each location as we had gotten a late start and it was heating up rapidly (there is little to no shade around the lake).

I spent the rest of the afternoon revising the old checklist for Karaivetti with new species names and checking for holes in the list (I found three regularly occurring species from the morning that weren’t even on the list for the site yet!). Around 5PM after the mid-afternoon tea, I played some cricket with some of the boys from the school. I must say that the pitch could be in better shape, but some of these kids are really pretty good! At about 6:15PM I decided to check out some local reedbeds and small ponds that Relton told me could harbor rails and bittern. I had quite the entourage by the time I got to the rice paddy bunt. My shoes and feet stayed mud free for a whole four minutes before the inevitable just couldn’t be put off anymore. Due to the size and noise created by my group of enthusiastic young friends, I saw almost nothing during the hour walk, but I know how to get to the ponds on my own now, so it served a good purpose. I also was able to see a few things despite the noise and saw Ashy Prinia, and my first ever Jack Snipe.

Today was the first day I didn't take a nap in the afternoon in an effort to force my body into total adjustment into the time zone here. That fact coupled with the early wake-up and abudance of sun today has me currently exhausted. Tomorrow is my first day of actual surveying and driving out there on my own in the morning. I'll try to get some more action pix too... 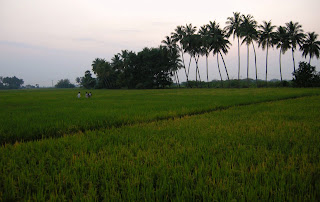