A Day of First’s

Today was my first day conducting the survey at Karaivetti on my own and it went quite well. In the morning, I drove the moped solo for the first time and I also was initiated to actually driving on the left side of the road! I’ve been a passenger many times in the and in , but being the un-thinking spectator is a far cry from actually remembering that right turns are no longer the safer of the two directions to turn! Another thing that I learned today is that when you wear glasses and drive in the morning when there is light fog, it accumulates on your glasses! No wiper blades to help you out when you’re on a moped! I managed to remember the route to the wildlife sanctuary and didn’t take any wrong turns as I wound my way through four different villages. I took a shortcut that Relton and I had taken on the way back yesterday over a shallow ford of a river. Yesterday there was a very small pool of water (2 inches deep and 2 feet long) that we had to cross and since we are entering the dry season here, it is supposed to do nothing but evaporate here over the next couple of weeks. Imagine my surprise as I drove down the banks of the riverbed and saw at least three pools that were over 6 inches deep! I strategically drove across the shallowest areas and had enough momentum that I managed to not get stuck in any of the water! 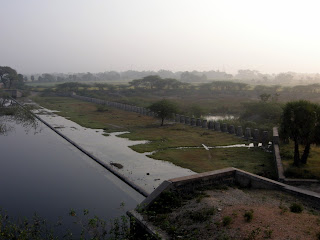 The photo below is of the far end of the lake where I start the count at, but this is a very similar type of ford as I cross on the way to Karaivetti Lake

The bird survey went well today and I saw 93 species in four hours of surveying just the wetland and its surrounding habitat. I saw two new species of birds that hadn’t been recorded in the sanctuary before. One was an Indian Peafowl (aka Peacock) that I flushed from along the same shortcut that I mentioned earlier. The habitat surrounding the wetland system is primarily an arid scrub and areas that are being cultivated using water pumped from the river. Indian Peafowl are much more common in more heavily wooded areas with less people (the larger you are means you would make a good meal for a family in one of the many villages in the area…). So, this sighting was noteworthy for this location and I doubt that I will see many more Peafowl in this area over the next month. The other new bird for the Karaivetti list was a Paddyfield Warbler, a very drab small songbird that spends most of its time in thick reedbeds and grassland areas. This is a fairly common species in wetlands throughout southern and I suspect that it has been seen here before but was overlooked when the list was being compiled. Other highlights for the day included several flocks of Bar-headed Geese (that had been absent yesterday), more Spot-billed Pelicans, and Eurasian Spoonbills. Aside from the peafowl the best bird of the day was probably a Brown-headed Gull seen harassing a flock of Whiskered Terns. There is only one prior record of this species at the lake from 1997. I suspect it is more regular than that, but the coverage here just has not been high enough to note them many times. I also was able to relocate the Greater Spotted Eagle that Relton had told me was wintering in the area (an eagle closely related to the Golden Eagle. This is a species of conservation concern and it is very uncommon this far south in at any time. This is the fourth or fifth year that it has been seen in the area though. 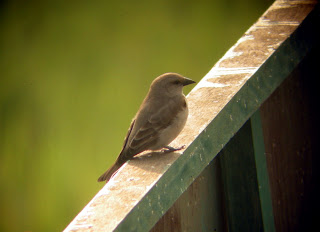 At several of my stops there are Chestnut-shouldered Pretonias nesting in the metal poles. This species, which is closely related to the House Sparrow, is fairly common in arid scrub throughout the subcontinent (see left). During my return trip to Pullambadi, I was able to locate a large flock of Yellow-wattled Lapwings (21 in all), a fairly widespread species that had eluded me despite constant searching last year when I was here… It is a very sharp looking bird with a black Zorro mask and of course its yellow “wattle” that hangs from the base of its beak. I will attempt to get a photo of them when I get a chance as I can’t do the bird justice with a written description. Here's a pic of me at the third stop where I count from. Today I had some enthusiastic locals stop by who were eager to look through my scope (see below). 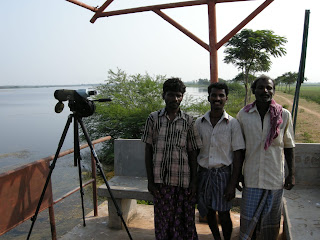 Since I played cricket yesterday, it is apparently now compulsory for me to play in the schoolyard at 515 every evening. More boys played this time and we actually had two teams of three (the yard isn’t too big, so it works out). I’m learning more of the nuances of the rules and all that practice fielding groundballs and catching fly balls for baseball during high school is actually of some assistance! Ah, the power just went out and along with it the fan that keeps my room tolerable. Rolling brown-outs are the norm here with at least four a day with various durations. Stuff you take for granted in the …power. 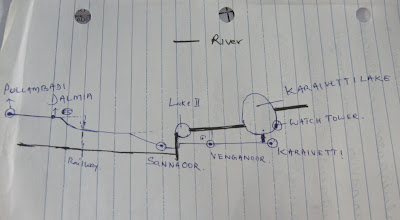 Above is a sketch by Relton of the 13km route I take from Pullambadi to every morning. Here they do not have the luxury of detailed maps of every dirt two-track in the country like we do in the . Also, funny side-note; my hosts were amazed to find out that Sean Connery’s name is pronounced Sh-awn just like my name, apparently everyone in India calls him “Seen” Connery!