Tom Prestby and I spent the afternoon searching for open water along the Yahara River in Dane County. We ended the day at the UW Arboretum in search of redpolls (no luck on them surprisingly). We did have a Northern Shrike pop up right over us when we were near Teal Pond. Since it was the only bird I attempted to digi-bin in the freezing cold yesterday, here's the best I managed. I was frustrated in my attempts to keep my hands from shaking and the quality of the image suffered as a result... 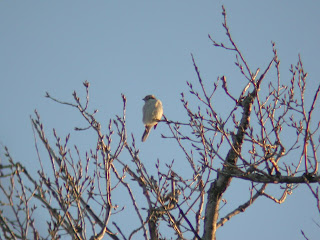 Here's Tom's summary of the day: