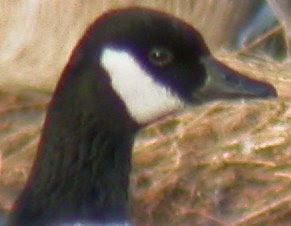 I've been checking the same stretch of Sugar Creek near Burlington several times a week in the hopes it will yield more interesting geese. The numbers 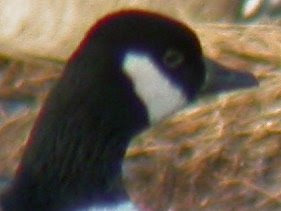 have been quite impressive for the location (over 4500 yesterday evening) but have been low on diversity since I first found Cackling Geese there a couple of weeks ago. Today I saw a goose that was definitely smaller than the surrounding Canada's but whose beak just wasn't small enough for it to make the cut for a Cackling Goose.
It was very interesting when reviewing my photos of the bird of how marked the difference head angle made when comparing the relative length of the beak compared to the width of the head. I cropped in on two images taken one after the other to illustrate this point (both on the left). Not only does the second shot make the bird look smaller beaked but it also appears to accentuate 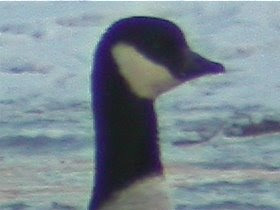 how steep the forehead is on the bird! Now even the second shot appears to have too long of a beak to be a Cackling, but it is reasonably close (comparison head shot of a Cackling Goose on the right that I photographed at the same location on 2/16)! Here are a few more size comparison shots of the Lesser Canada with other Canada's (presumably Giants). 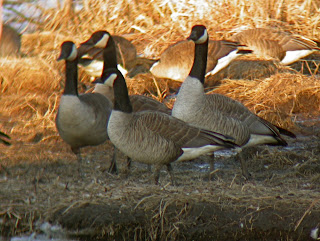