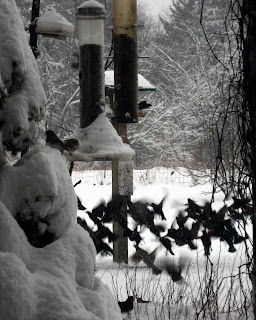 I arrived back in Wisconsin last week and quickly began trying to readjust from the 12 hour time difference from Thailand. Imagine my dismay to wake up to a good 7 inches and have it snow the entire next day! I thought I had managed to escape most of the winter...apparently wrong! The saving grace of the tardy snowfall was the large blackbird flock that was attracted to the feeders. Mostly Red-wingeds, but a few grackles, along with a single female Brewer's Blackbirds were also present. This was the first time I can recall ever seeing a Brewer's at the feeders at my folks house.
Spent the ensuing week readjusting to the US, presenting my internship powerpoint in Grand Rapids, and visiting with friends and family. I'm posting this from a coffee shop in Yuma, AZ. I begin solo point counts in the morning. Lots of really cool birds that I've only seen a handful of times before. Sleeping out in the open without a tent, something that you cannot do in WI or MI in the summer. The stars are incredible. I'll try to get some pix and I'll also try to do a few back entries of Thailand...photos are lacking though.