Western Ghats: the hillstation of Valparai 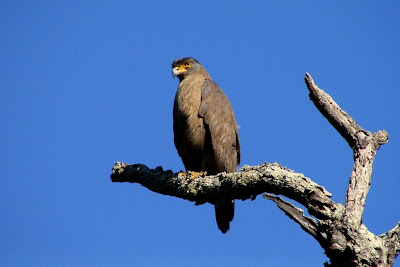 The past three days I spent birding the Valaparai area of the Western Ghats with Relton. Valparai has by far some of the best birding that I've experience in the ghats. The elevation is higher than in Topslip (3000m versus 2000m) which provides more moisture and cooler temperatures that in turn support more of the evergreen community. There are a whole host of birds that call this evergreen habitat home, among them some extremely local endemic species. It was these birds that we were primarily targeting during our time in Valparai, and we were fortunate enough to observe the very uncommon White-bellied Shortwing at close range. This is one of the rarest birds that I've seen in my life as their limited habitat is being fragmented and cleared for plantations of tea and coffee. They are listed as globally vulnerable by Birdlife International with an estimated global population between 10,000 and 20,000 birds. This was only the second occasion that Relton had ever seen one while not mistnetting, so I count myself as extremely fortunate to have seen one! 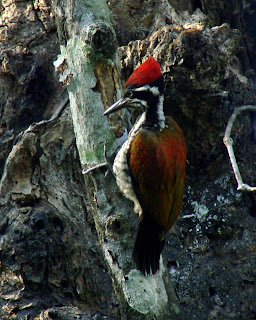 flycatchers and specialties that I had seen last year, but that are globally quite uncommon; Nilgiri Flycatcher, Indian Swiftlet, Malabar Grey Hornbill, Malabar Whistling Thrush (photo below), and a good raptor in the form of a Common Buzzard (ubiquitous though it may be in the UK and throughout much of northern Eurasia, it’s a rare winter visitor this far south). I also got a nice photo shot with a pair of Greater Flamebacks (left)...unbelievably cooperative!
We spent our two nights in Valparai driving roads through the more rural parts of the area in between coffee and tea plantations and isolated patches of the remnant native evergreen forest looking for owls. It was literally in the 11th hour on our second night that we finally saw our first nocturnal bird, an Oriental Scops Owl, perched on top of a small cement post by a grassy ditch. We saw a nice variety of mammals including Sambar Deer, Barking Deer, Porcupine, Giant Flying Squirrel, Black-naped Hare, and Bandicoot Rat (enormous!).
On our way back down the famous 40 hairpin turn into the lowlands we stopped when we heard birds and located several nice mixed flocks. Most of the species were the same ones we had recorded at higher elevation, but this was the only time we recorded Black-lored Tit, a brightly colored and crested relative to the chickadees and titmouse of North America. We also had the good fortune of simultaneously arriving at the same large snag as a Crested Serpent Eagle, a widespread bird in the hills and mountains of India, but this bird would have definitely flushed if it had already been present and we had then pulled up and stopped. It was extremely cooperative despite the passing buses and trucks that were politely letting us know that they were present by the incessant use of their horns (opening photo). 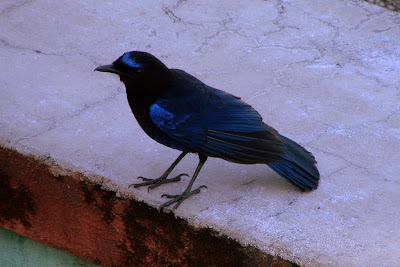