[Note - due to some technical difficulties including more prevalent brown-outs than normal, the phone line rusting through, and an earlier than expected exit from Pullambadi, I have been delinquint in my blog posts. I apologize. This post was written on the 28th...]
Today was fairly standard day with no truly noteworthy species being noted (and I didn’t see my “reliable” crake after I quoted the high percentage of success yesterday…). The highlight for me was a flock of ~20 Yellow Wagtails I noticed foraging in a series of freshly harvested rice paddies. There were local villagers still working fairly close to where the wagtails were and the

birds seemed semi-oblivious to the precence of people, so I thought I had a good chance of getting some good photos of the species (which I hadn’t had any luck photographing up to this point). I vaulted the acacia thorn poor-mans fence (piles of extremely thorny branches placed around fields to keep out goats and cows) and made my way out the bund to the edge of the wagtail flock. I then sat down and waited for the birds to get close. After about fifteen minutes several of the birds had made their way sufficiently close to me that I was able to get some pretty good photos of this highly variable-plumaged species. There are three different ages with identifiable differences in plumage (hatch year, second year, and adult), each gender also looks different at every one of these ages. Add in the fact that there are at least seven different subspecies present during the winter in India and variability in plumage that appears to rival gulls, identifying these birds to age and subspecies is proving more than I’m up for!

I am getting more comfortable identifying wagtails at least to species, but thus far I’ve only been dealing with Grey, Yellow, Citrine, and the very different looking resident White-browed. This year I haven’t seen any of the White Wagtail complex that seems to be alternately split into several different species and then re-lumped back into subspecies every few years on both sides of the Atlantic (the Brits and Americans have different listing authorities…go figure eh). All this preamble is just to give some sort of an idea of the complexity of this species group. At the same time, I have to say that I’m quite a fan of wagtails in general. Their behavior, calls, and plumage all are fairly unique. They appear similar to the pipits that I’m accustomed to in some respects, but they are much more vividly marked. They also apparently gather in fairly large flocks during migration (roosting in reedbeds like swallows). I’ve only had the good fortune of observing one such large flock (in excess of 400 birds), which I observed flying north fairly high up over a vantage point near Kamaraj Dam in the foothills of the Western Ghats last year. The flock of Yellow Wagtails I observed today is thus actually the largest flock I’ve noted where I was actually able to study the birds. Their habitat preference I noted was quite a bit different from the Grey and Citrine Wagtails I’ve been seeing with some regularity along the margin of the lake. These birds were foraging in dried out paddy field among dried stalks of rice. Perhaps this apparent propensity for drier habitat has been part of the reason I haven’t seen too many Yellow's thus far.
I actually do not have the guide to wagtails (yes they most definitely merit their own field guide!) and the India and Thai guides I have here really don’t do the various subspecies justice… Here are three different individual Yellows I was able to photograph this morning though. Any thoughts/comments as to the age/gender/subspecies of these birds would be most welcome! Side note: the third bird pictured I'm unsure of, it may be a Grey Wagtail,

but I think the fact that it has a yellow throat puts it more firmly in the Yellow camp. I could definitely be wrong though (on right).
Alan had the misfortune of developing a puncture today so he was only with me for the first hour or so of the survey before he went into the village of Karaivetti to have it patched. He had ridden on the bike too long before he noticed the flat and there were too many holes to actually just patch it. So a new tube was driven in from Pullambadi by one of the drivers at the school. This took the better part of the morning and I didn’t see him again until I returned to Pullambadi at 12:15PM. The water level is rapidly dropping at the other lake and I think I might actually see some interesting shorebirds there before I’m finished with this survey. 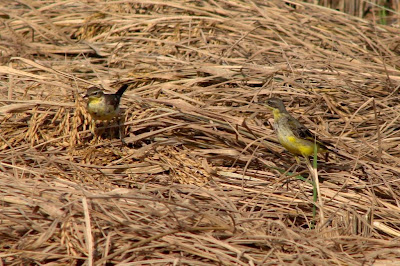