Eurasian Sparrowhawk and an unexpected visitor

Today there was a nice breeze and I knew it was going to be a more pleasant day to be out, little did I know that the birds would also provide some additional enjoyment. We began our survey at what I’ve begun to call “crake corner” and were able to have nice looks at one and possibly two Baillon’s Crakes (I’m batting 86% on that bird over the last seven days I’ve been out there). Continuing on to the tower we were enjoying our breakfast and counting arriving and departing birds when I heard Blue-tailed Bee-eaters give a rapid alarm call and watched four of them blast past our second story vantage in the tower. I suspected a raptor was present and sure enough, a moderate-sized accipiter was soaring over the edge of the water near a grove of palms and acacias where the bee-eaters had fled from. As soon as I saw this bird I knew it wasn’t the numerous Shikra (the local default accipiter) due to its slightly larger size as well as its darker and more prominent barring underneath the body and tail. I also was able to see the throat well which was clean white on this subadult bird. After the bird had passed along I checked the guide to see if my hunch (Eurasian Sparrowhawk) was correct. The only other possibility, subadult Besra, was eliminated due to the barring on the breast (Besra has streaks) along with the clean throat (Besra has a strong “gular stripe” – central throat stripe). This species is rare in southern , but not totally unprecedented according to the range maps (a dangerous thing to rely on here!). I’ve also observed Eurasian Sparrowhawk on at least a dozen occasions in the and I’ve observed the previously mentioned Besra in the a handful of times.

We had moved along and were about to leave the second to last stop when a car pulled up along the only road that actually intersects the lake and I was surprised to meet K. V. Sudhakat, a birder from Chennai who had been reading my blog and had taken a slow day at work and driven down to Trichy (about an 8 hour drive…) with several of his co-workers to see Karaivetti and to meet me! It

was extremely fortuitous timing as Alan and I were about to leave when he pulled up. Anywhere else along our route it would have been next to impossible for someone in a car to have rendezvoused with us (and I also didn’t know to expect him!). We talked for about 45 minutes, I showed him the ashy-crowned sparrow lark nest and we saw fairly routine things (Osprey [on left], Yellow Wagtail, along with only my second sighting of a couple Red Avadavat’s) while we chatted. He was hoping that I would be leaving via Chennai and I could stop by a local nature club to speak before returning to the . Unfortunately I’ve already purchased my airline tickets to out of Trichy via , so this would be logistically impossible for me… It was still nice to meet another birder in a country where they are truly the exceptional find though!

The rest of our survey was fairly uneventful but I did see an Alpine Swift over the other lake (my third sighting this year…only one prior record). I also noted only my second Common Kestrel during the twenty-two days I’ve been conducting this survey, remarkable in their absence. One other note of interest, the male Ashy-crowned Sparrow Lark was seen brooding the eggs today. I’m not sure if this has been noted for this species before but this is fairly unusual in most north american passerines (songbirds).

Over the past few days I’ve been devoting more of my attention behind me as I’ve had a second bike to worry about since Alan has been accompanying me. I’ve noted with dismay that both of our bikes seem to share an unhealthy appetite for oil (and I promise you that neither of these bikes have any ties to Halliburton or Dick Cheney). Apparently these bikes could use a tune-up, or possibly need to be retired as I feel confident that my moped is at least as old as I am (Alan’s bike looks to be at least a decade my senior). At the same time this makes me feel comfortingly more a part of the global community. Mixed emotions…

I also would like to take this occasion to share a nightly part of my stay here which involves me going through the old kitchen (that I normally keep closed up) on my way to the “shower” (bucket of hot water mixed with cold tap water dumped over my head). As I open the door and shine my light (usually a candle since this typically takes place during the daily 6-8pm power outage) in the room I hear mass scurrying as a very healthy population of cockroaches all head for cover. I got to test out the macro lens on Relton’s camera on a particularly friendly individual earlier this week. I don’t think it would be fair for me to show you nothing but the avian wildlife that is present in southern ! Yes, I shake out my sheets and clothing every night/morning before I put any of it near my skin! I can’t think of a better way to end this post, so until tomorrow! 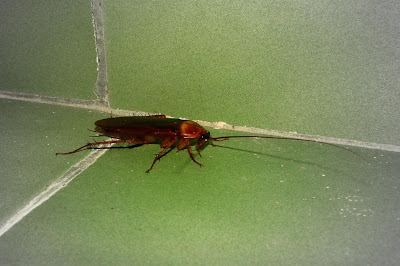