Today marked the first unforeseen event of my stay here. The rear tire on the moped began to lose air at a rapid rate as I was making my way around the edge of on my way to the first stop. I got off the bike to avoid further damage to the tire and rim and walked it up to a shaded area where a small road intersected with the road around the lake. I called my host, Mr. Devadass to see what the best thing for me to do. Since it was totally flat, he decided to send two of the men who work for the school out on a motorcycle with tools so they could detach the wheel and take it to the nearest repair shop and bring it back so it could be ridden back to the school.
I then conducted as much of the count as I could on foot while I waited for help to arrive. I saw many more songbirds today since I was on foot in between the locations where I normally stop on the bike. Probably the best bird of the day though was a subadult Watercock that I flushed out of the edge of some rice paddies. The Watercock is closely related to both rails and gallinules and shares many of the attributes of both. It actually resembles the yellow rail that is in in its subadult plumage, the adult is all dark with a red beak. Other than that, most of the birds that I saw today were fairly standard, I did see a small flock of Northern Pintail and Spot-billed Ducks, surprisingly this was the first time I’ve seen either of those species here this year (pintail are present in the thousands here earlier in the winter season). I took my opportunity of walking the dike around the lake by taking many more photos of birds here today. 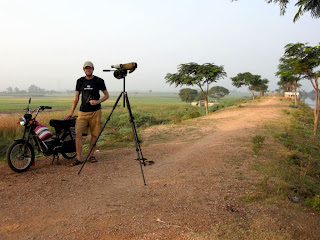 When I am conducting the full count, I don’t really have time to spend taking too many photos, so I will meter my good photos from today out over the next several posts! Here is a quite obviously staged photo of me “on station” this morning.

Once help arrived, it took another 45 minutes for them to take the tire to a nearby village while I waited and did a little more photography of a small flock of the near-endemic Ashy-crowned Sparrow Lark. The intensity of the sunlight here even at a fairly early hour of the morning (8AM) makes it very challenging to get truly good photos of these birds. I may leave a little bit earlier tomorrow to try to counter this and give me a little more chance at the “money” sun-angle the early morning provides. 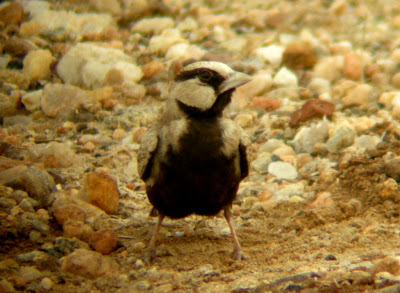 Great to be able to follow your journey, man! Keep the posts comin'.