Rufous-tailed Lark and the lark conundrum… 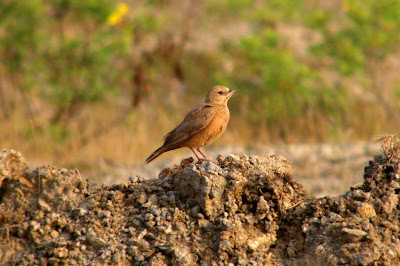 Today I saw a pair of Rufous-tailed Larks. This marked the first time I’d seen that species since my initial introductory day out at the site with Relton. I was able to park the moped and approach the extremely cooperative “lookout” of the pair and get some really nice photos of this species (a bonus!). After returning to the house and reviewing the photos I began to review some of my photos of the other lark species here. I was able to catch a couple of photos that I’d actually misidentified in the past week as I was looking at the wrong field marks. There are three very similar species, Singing Bushlark, Indian Bushlark, and Rufous-winged Bushlark whose differences boil down to degree of darkness of spotting, how long the hind claw is in relation to the hind toe (I’m not making this stuff up!!). What makes the whole situation more difficult is that many of the birds I’m seeing are in fairly worn plumage. Many of the key plumage marks that I was looking for are now worn and faded into non-distinct reddish browns (that look the same on all three species!!). So this has made me doubt some of my previous

identifications and I will definitely be checking all of the bushlarks more closely from now on (on the right is a photo from yesterday of what I’m fairly certain is a worn Rufous-winged Bushlark). The only thing in the larks favor is that many of them allow for fairly close approach and they perch on the open ground making them much easier to photograph and sort out later than some of the other confusing species groups that are present here (leaf warblers and phylloscopus warblers are ridiculous…).

The survey ended up being a bit slow today. Highlights were probably another look at a Yellow Bittern, a brief re-sighting of the Ruddy-breasted Crake, a flyover Ashy Woodswallow (only my

second in 13 days of surveying), and I also finally tallied Spotted Owlet for the sanctuary. I only noticed them because an Indian Roller (photo on left) was dive-bombing a hollowed out branch on a large tree and making a big ruckus. I’m not sure why the roller was concerned about a screech owl sized bird (the roller is the size of a crow), but I’m grateful for its watchful eye! If the owlets are present at the same place later this week I may be able to get a photo of them. I did finally get a decent photo of the ubiquitous White-throated Kingfisher (see below). This species is remarkable as it is literally in every sort of semi-open habitat here, from arid scrub to mountain grassland, also of course near various bodies of water. It apparently hasn’t the slightest preference as to what it catches for prey, because it has to be very adaptable to succeed in rather sparse areas far from water like the arid scrub that is present in much of this area. 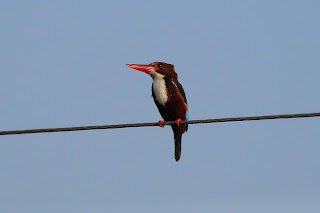 The petrol prices were raised by the Indian government yesterday (they have national price controls on it here). A whooping 3 rupees per liter increase (now 61 rupees/liter at Reliance, the station I stop at = $1.70). Devadass was telling me that there will be huge protests nationally because this prince increase will ripple through the prices of most goods since the transport costs will now be higher. I told him that I’m intimately familiar with how the price of gasoline has repercussions on an economy and people’s actions. The only truly national protests we see in are reflected by the manner in which the New York Stock Exchange reacts to the price increase…

Today a man stopped me and asked where my “origin country” was (a quite common question obviously), when I responded with , he asked north or south! This was the first time I’d received this reaction so it caught me off guard, I said north but when I added U-S-A he understood. I also had a local ask if I was from today (I didn’t bother attempting to explain the complex fact that I actually was born there and just said “No America”). I also observed another man almost fall off his bicycle as he craned his neck around to stare at me as I passed on my moped along the road today (I watched in the rearview mirror…thereby avoiding duplicating his move!). Tomorrow Relton is planning on coming out and conducting the survey with me and we are then going to some other grasslands in the area in search of thick-knees and sandgrouse. Until then!