As the water levels here continue to go down the birding is getting even better. Today saw many more shorebirds and waders arrive. Due to my changed routing (because my shortcut had too much water) I have been driving past a rice paddy that has been harvested and all the rice plants turned over making it into very nice shorebird habitat. This morning there were quite a few snipe present, 4 of which were Pintail Snipe and there was also a single Jack Snipe present (new for Karaivetti and quite a bit smaller than the Pintail Snipe). Little Ringed Plovers, Green, Wood, and Common Sandpipers were also present in the same muddy area. An additional new species showed up in the form of a Laggar Falcon that I saw in the dry scrub habitat that I drive through on the way to Karaivetti (maybe 2 km away from the actual lake). Many more dabbling ducks appeared at the lake today. They are dominated by Eurasian Wigeon, Northern Shoveler, Cotton Pygmy-Goose, and Garganey. Small numbers of Pintail, Common Teal, and a new species for me, Comb Duck were also present today. The Comb Duck is pretty distinctive being all white with dark wings. The bird actually looks like a male Cotton Pygmy Goose on ‘roids as it is very large. The wader numbers are increasing as the water levels are going down. Today I saw a White Stork feeding in the shallows with a group of Eurasian Spoonbills and Black-headed Ibis. Small islands are appearing among many of the trees where the rookery is. These muddy islands 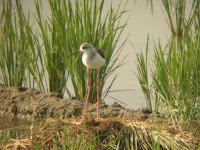 are beginning to attract Black-winged Stilts (on the left) and Red-wattled Lapwings. Unfortunately, they are so far away that these are the only species I’m really able to identify (both are large and have very distinctive plumages…thus I can identify those two). I have observed other shorebirds moving around out there, but aside from a single Marsh Sandpiper that flew past me on its way over to those islands this morning, I’ve been unable to identify any of the other species present there.
There must have been a very large concentration of fish under an algae mat on the side of the lake because the mixed wader, cormorant, and tern flock it attracted was really pretty impressive. The birds were so fixated upon the fish that they allowed for much closer approach than usual. The waders present included Great, Intermediate, Little Egrets, 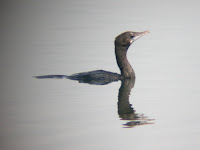 Indian Pond, Grey, Purple Herons, Indian, Little Cormorants (on right), Whiskered, Common, Black-bellied, and River Terns, as well as a fair number of Pheasant-tailed Jacanas. So yeah, today was a very good day of birding (114 species with many raptors not seen), hence my longer than usual description of birds (sorry to the non-birders who just skipped over all that…).
Over the past week (yes today marks my seventh day of traveling out to Karaivetti) I have learned several things about driving here in India. I’ve had to reprogram many of the things I’m accustomed to doing when I drive in America. Take for instance, the horn. I may use the horn on occasion in the US (usually if someone just endangered either themselves or me by their stupidity), I typically would associate using the horn as only a last-ditch thing that some may consider rude. Here it is not only considered courteous, but also advisable to use your horn to let other drivers and pedestrians now you are passing or that you are coming (like being forced to the far left by oncoming buses and trucks). The proper position for my hands are for my right hand to be on the throttle with two fingers over the brake and for my left hand to have three fingers on the brake, one for steering and the thumb sitting over the button for the horn. I’ve also made it quite the practice to breathe through my nose and squint as I drive. The amount of dust and exhaust that is kicked up by buses and trucks is enough to give anyone with asthma serious problems (luckily I don’t have asthma so it’s just a nuisance).
During my survey this morning I realized that I hadn’t mentioned any of the other wildlife that I’ve seen besides the birds. So far I’ve seen very few snakes, only two water snakes of some sort, and a roadkilled something today. King Cobras are fairly widespread here so I’m a bit surprised I haven’t seen one yet. I also saw a pretty sweet looking reptile that I think is a type of Monitor lizard, fairly large (3+ feet long) and grey, smooth-skinned and it fled into the water after being harassed by two Red-wattled Lapwings. 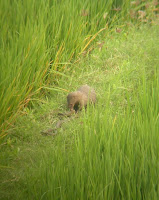 Bonnet Macaques (monkeys) are present along the road and Grey Mongoose I’ve seen every morning either crossing the road or along the dike that surrounds the lake. Here is a photo from last year that I was able to get of a Grey Mongoose eating some sort of snake it had just killed, also at Karaivetti!
AND – after two and a half days of being roasted by the sun, I got up my courage and I’m extremely pleased to say that my camera is somehow working just fine! The cell phone freezes up, but functions to some extent. The camera I was much more concerned about and I honestly cannot believe it is working! I’ll now be able to take some more photos as my stock of decent images was running down after three days without it!
Posted by Sean Fitzgerald at 2/06/2008 10:04:00 AM