Today the highlight of my day didn’t come in the form of any avian novelties (despite a good day) but instead occurred during my drive back to Pullambadi from . I was on the final 4 km stretch that is much busier and has truck and bus traffic and I was keeping an eye on a small tricycle-truck (I know this sounds like it is literally impossible combination – but it is totally possible here!) that was rapidly closing on me in my rear-view mirror. Sure enough, it honked its courtesy warning that it was passing me (duly appreciated) and accelerated past me. Apparently this particular driver wasn’t that familiar with this road, because he definitely choose the wrong location to slingshot around me! We were fast approaching a series of three speedbumps that had just been added five days prior. The middle speedbump actually more closely resembles a small ramp it is so large. I had already begun braking when he honked and I totally knew what was going to happen and watched in amazement as this “tryke-truck” launched off the middle speed bump going at least 60kph and caught a good foot of air under the tires! He actually almost cleared the third speedbump, and I honestly thought that little truck was going to fall apart it rattled and banged so much upon landing… I then struggled to maintain control of my own scooter as I was laughing so hard at the seemingly impossible event I had just witnessed! The next speedbump a km up the road the vehicle slowed down for…

So yeah, the birds today seemed slow, but I actually topped yesterday’s tally by four species for my best day yet (122)… I don’t know why it seemed slow, maybe I’m just getting used to everything I’m seeing. A few interesting waders were seen including four Painted Storks that gave me a nice flyby (see photo below), I also had only my second sighting of Glossy Ibis today (2 birds), along with a pair of Lesser Sandplovers (formerly Mongolian Plover) that I can thank a male Pallid Harrier for flushing up past the tower. Probably the best bird of the day was a Grey-bellied Cuckoo that is only the second record for the sanctuary (and a new species for me). 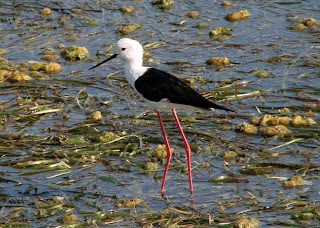 The water levels at the lake are actually back up to the same level they were at the end of January… This is good for the ducks but not good for the waders that I was hoping to be seeing higher numbers of by this point. All the shorebirds I see are either flybys or perched on the extremely distant small islands out under the rookery. Black-winged Stilts are literally about the only species I can ID at that distance. Yesterday I lucked out and had a pair of the stilts actually foraging on top of floating vegetation (like a jacana) right by the dike. Here’s a shot of a sharp looking adult male (black back rather than brown on female and immature birds) on the right. I didn’t relocate the Gadwall because all the ducks at the other lake were roosting on the opposite shore far beyond the range of my scope.