Leave No Lark Behind 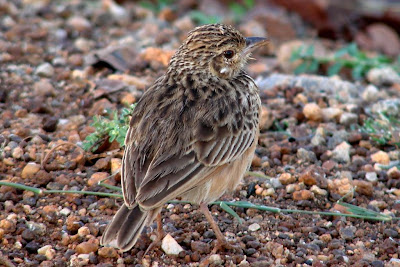 While out in the field this morning, with perhaps too much time on my own with no one to talk to, I decided to name my renewed examination of the various species of larks present after the US Education system’s catch-phrase of a similar title (child and lark obviously switched). I don’t recall who actually coined this phrase, but since I can’t accredit a single person I’m going to give the acolytes to the US Education system (and honestly I think it can use all the praise it can get these days…but that’s another story). Anyway…I drove the dikes around the lake much slower today and was stopping and checking every lark that I saw (probably ~30 or so today). After thinking I had figured out most of the key field marks yesterday when I noted predominately just Oriental Skylarks and Rufous-winged Bushlarks, I realized that I definitely don’t have them all figured out yet! I saw two birds today that I honestly am not sure what species they were. Since the degree of rufous that is shown in the primaries is supposedly a great (and easily seen) field mark, that’s what I’ve been trying to key off of (and since hind claw length is kind of ridiculous to easily see…). The larks seem to enjoy discarding the myth that this is a reliable and easily seen fieldmark. Whether they have their wings folded in such a way that you actually can’t see the primaries while they are perched, or are so worn that you can’t tell if the color that I’m noting is really what is represented in the field guides I have. I really could use a “Bushlarks of the World” in depth guide or something like that. I bet there is one, but I definitely don’t have

it here… Anyway, I did finally get a photo of an Oriental Skylark which was represented by a contingent of seven today. These guys are pretty easy as they have a crest and they show much darker wings when they fly up out of the way of my rapidly approaching moped (on left). The opening photo is yet another photo of a Rufous-winged Bushlark from today (ok promise I won’t post anymore of this species…it was less than ten feet away though!!).

While the fact that I’m actually going to the same location every day is getting a little bit tiresome, it’s also presenting me with many more opportunities to photograph many species that are either wary or just not cooperative. 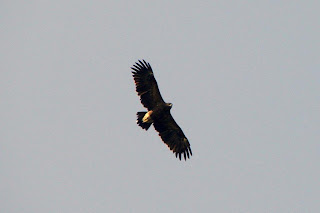 The later is true of the Greater Spotted Eagles that I’ve seen every day that I’ve come out here, but they are typically extremely distant and far out of the range of the photographic equipment that I have with me. Today I got lucky and had a Greater Spot soar right over the observation tower. It is a bit tricky to get the auto focus on the camera to grab a hold of a flying bird, so I was very grateful that the eagle gave me three circles directly overhead before moving off. It was a little bright by this point in the morning so the light is rather harsh in the photo, but beggars can’t be choosers! I also resighted the unusual Baillon’s Crake that I observed on the 9th of February. I saw it in essentially the same location which also happens to be where I’ve been seeing Ruddy-breasted Crake(s) (three flushed yesterday).

Today I had a group of five local women who took a break from carrying firewood to enjoy the shade of the observation tower and see what I was up to. They thoroughly enjoyed looking through my scope at the 168 Bar-headed Geese (incl the lonely Greylag) that were spread out on the water. After several minutes of non-stop emphatic Tamil and gesturing I offered to take a photo of them to at least appease them of whatever they were trying to communicate (this often works to resolve situations such as this). They lined up like they were part of a chain-gang and presented stoic expressions (an apparently common trend as people are afraid of being captured

smiling on film…). They were all laughter after seeing the photo on the screen and they then communicated that they would like a photo of them with their bundles of wood on their heads. I obliged them partly so I could continue my count in peace but I was also curious to see how they got these enormous bundles on their head. They would put a sort of towel on the top of their head with a sort of saddle-like depression in the top and they would then lean over into the wood and have another woman help hoist the wood while she straightened up (on left) with the bundle situated above her! I was impressed and with a little coaching I lined them up and took the following photo of them before they set off, each of them shaking my hand before they left. Now that, you don’t see every day in ! 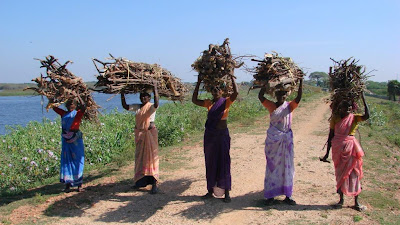