Today was a very enjoyable day to be out in the field. The morning was nice and cool (~70F) and as the day progressed a large number of clouds rolled in moderating the heat that normally really takes off around 10AM. The presence of these clouds allowed me to spend more time finishing the survey which ended up being the best day of the count thus far (97 species). I saw several species that are rare at the sanctuary including a sharp looking male Pallid Harrier (last record 2000), a lone Alpine Swift high up with a large group of Asian Palm Swifts, Barn and Red-rumped Swallows (also last recorded in 2000), 3 White-browed Bulbuls, and a single flyby Common Redshank (uncommon at this site due to a lack of suitable mudflat habitat). I also recorded a new species for the sanctuary (its 197th), a Long-billed Pipit. I was unable to get any photos of it, but it really isn’t too dramatic looking compared to many of the birds here… 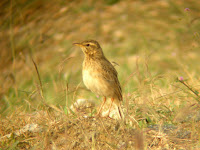 It is quite a bit larger and more heavily streaked than the much more common Paddyfield Pipit that I’ve been seeing regularly (photo from yesterday). I also saw a wagtail that I’m going to withhold identification on as I’m emailing some people in the know as to its identity (I have very little experience with wagtails and I’m fortunate to know people who do have experience with them!).

This morning I took the shortcut again and I don’t really understand where this water is coming from as it is super dry here, but the crossing was even worse today. I stupidly decided I didn’t want to double back and drove through it, but I barely made it 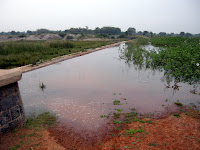 (here’s a pic I snapped after crossing…). On the return I went the long way and I don’t plan on taking the shortcut for the rest of the week (I’m hopeful it will dry up during that time). Oh, I also stopped at the Yellow-wattled Lapwing spot on the way back and got an okay photo of one since I promised an attempt in an earlier post. It was 11:30AM when I took that photo which is well past when the light is good. The bird (one of 21) was standing in the shade of an acacia tree…not a bad plan. You can tell that it is a bird of dry grassland and scrub by its coloration, not too much contrast with the dry grasses it’s standing in! 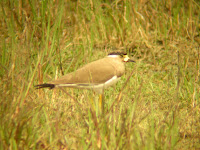 Just for comparison’s sake, here is the much more common and extremely widespread Red-wattled Lapwing that is also here (the Indian version of the Killdeer).

The family I’m staying with here has my tastes pegged. The food I’ve been eating I not only can tolerate (pretty much best-case scenario meal for me last year when I was here) but I actually am really enjoying. The names of all the things they serve they tell me repeatedly, but I’ m afraid I just can’t keep them all straight (my mom would take this opportunity to point out to me that I can keep all the bird names straight, so why not food names?)! I guess it’s just not a high priority for me to remember them since I will never be cooking any of these things… We also have tea or coffee every morning at 6:30AM (before I leave) and again at 4:30PM. I don’t think I would have been so long averse to coffee if I had grown up in India, it’s literally maybe 40% coffee and 60% cream and sugar! Today I discovered that a large bag of trail mix that my parents had sent along with me as “survival rations” had been found by a colony of very small ants that are living in the wall by one of my windows. The bag was totally sealed but apparently there is a small hole in the bottom of the bag, because the ants definitely found it are thoroughly enjoying the exported American trail mix! I’m now experimenting with moving the bag to different places in my living quarters to see how long it takes them to re-find it…cheap entertainment and I’m a science major…I can’t help but test things like this! Alright…tea time!