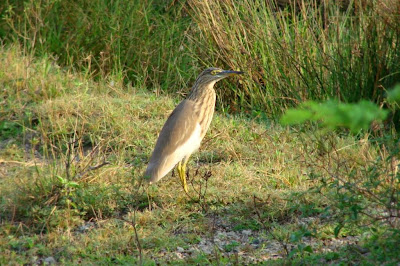 And the species is…Gadwall (and no this isn't a gadwall pictured above...it's an Indian Pond Heron). I find it mildly amusing that I’m finding waterfowl that are really fairly rare in this part of India, but that I’ve seen literally thousands of in either the UK or the US (just like the Greylag Goose). I could just as easily be finding species like Falcated Duck or Bean Goose that would be probably equally rare as what I’ve found, only extremely novel to me, but no…Gadwall and Greylag Goose! Gadwall actually isn’t a new species for Karaivetti, there is one record from 1988 as well. I did find one new species for the sanctuary (and me) today (#207) which appeared in the form of a Red-necked Falcon that zipped along over the rice paddies bordering the dike and did a loop past the shorebird spot probably hoping to surprise one of the fifteen or so shorebirds that are usually present there. This falcon is probably overdue to be recorded here as it is a fairly widespread resident of open areas throughout the subcontinent. It is slightly larger than a Merlin with a yellow cere (the area behind the beak) and a reddish wash across its crown and shoulders on an otherwise fairly grey body with dark primaries. Falcons are generally very impressive birds and this species was no exception. This bird also represented the 300th species that I’ve observed in , I’m glad it was a novelty instead of 301…Gadwall!

A couple of Red Avadavats were also my first in (I’ve seen them in where they are introduced just like the majority of the passerines there). Several shorebirds were also of note today including a lone Common Greenshank, two flocks of Black-tailed Godwits totaling 17 birds and a flock of ~80 Pacific Golden Plovers that I observed in flight at the other lake I check. I also think that I have the rail’s number as I saw two Baillon’s Crakes, a Ruddy-breasted Crake, a Slaty-breasted Rail, and a Watercock this morning all within a half hour of each other (normally all very difficult to see). Today was definitely a good day but for some reason there were a number of species that I had seen every single day up to this point that I inexplicably missed (Green Bee-eater, Bay-backed Shrike, Rufous Treepie, and Indian Robin). Despite this, I recorded my highest single day total of 118 species today. It’s days like this that keep me motivated to keep coming out to what are most likely going to be the same birds…

I’ve been watching with interest the behavior of Brahminy Kites as they course over the lakes. This is probably the most common predatory bird present and I’m amazed by the variety of prey I’ve observed the species eating or attempting to catch. These birds are a little smaller than Red-tailed Hawks (more like Red-shouldered Hawk size) but I’ve witnessed them carrying fish that are over a foot long! Most of their prey seems to be smaller fish, snakes, frogs, lizards,

palm squirrels (chipmunk sized), and small birds. I’ve watched them stoop on young coots several times but the adult coots go crazy and the young birds dive under water but I’m sure they catch one occasionally. The most impressive catch I’ve witnessed definitely goes to an adult Little Grebe that I watched being carried away still squawking by an adult kite…this grebe is comparable in size to a Pied-billed Grebe and I would have thought that these guys wouldn’t have to worry…apparently this is not the case! Here’s a photo of an adult Brahminy Kite in flight (left) taken near a stand of palms where I suspect a pair are nesting.

Also, the opening photo is of an Indian Pond Heron, a species that is present at literally every habitat where there is even a hint of water. They are quite impressive in flight as their entire wings are entirely white. Apologies for the lack of pertinence to this entry…I don’t have any good photos of any of the species that I was describing earlier… And I tested out the macro mode on the Sony Cyber-shot on this sharp looking dragonfly the other day as well (perched on the camera strap below!). If only birds allowed me to get the camera within 3 inches of them! 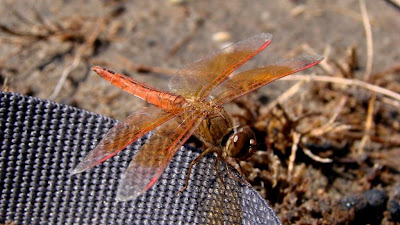 When fueling up the moped this morning I was grateful that the same attendant didn’t demand a tip, so I offered him one. I was vindicated in my earlier refusal when he emphatically refused it due to another attendant’s watchful eye!

Since I have been watching more cricket on the tele the boys I play with every evening have realized that they can’t tell me whatever they feel like with regard to the rules! Due to the constraints of the size of our pitch, we play what I would liken to half-court cricket. Normally the batter can actually hit the ball behind him (as long as it doesn’t hit the wicket) which really opens up the field of possibilities while batting. My bowling is erratic at best (that whole one-bounce thing makes things a lot more tricky), although if they let me actually throw (which some of them do) I’m money!

Another observation of a cultural difference between America and India; in America paved roads serve as places for vehicles to travel along, telephone wires to be strung along, and hazards for wildlife to cross. Here those same functions are fulfilled but roads are seen as having many more purposes than what we restrict our roads to in . For example, roads apparently are the preferred areas to lay out various grains (predominately rice but several others that I don’t know the name of) and have the buses and vehicles that traverse the road do the threshing of the seeds for them! And no, the fact that the rice is bound for human consumption does not mean that it will be listed under some sort of “seconds” or bargain price as a result of this treatment! The fact that hundreds of goats and cows pass along these roads daily (defecating as they go), not to mention vehicles that have never been introduced to an emissions test, doesn’t seem to faze these folks! The rice fields are all being harvested at this time (see photo), thus my observation of their use of the roads… 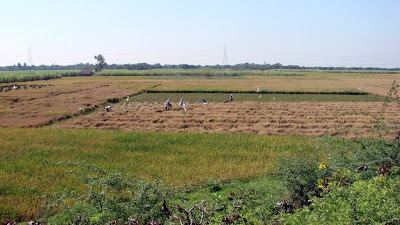 I’ve also been impressed by the truckers fastidious efforts to extend the fuel efficiency of their vehicles by removing or cutting off their mud-flaps! I can’t even begin to think about the vast quantity of petroleum that is saved by this reduction in the weight of all trucks nationwide (perhaps this would be a good thing for to suggest as a meaningful solution at the next global climate summit!). I feel confident that the glass lobby here is a force to be reckoned with though. The untold amount of dollars (sorry rupees) spent on replacement windshields for the vehicles traveling behind these trucks due to large chunks of gravel that are tossed up also must function as a boon to the economy (another thing that should be considered as a potential shot in the arm for the US economy). The reality of this situation is that I have to be extremely careful when traveling behind the gravel trucks that frequent 4 km of my daily route. I thought taking beetles to the face was bad!

In case you didn’t notice, the sarcasm is getting a bit pent up as it doesn’t transcend cultural boundaries well so I have to restrain myself here… All for today - maybe tomorrow I’ll find a mega rarity…like a Mallard!