Two rarities; a weather event and my first crake! 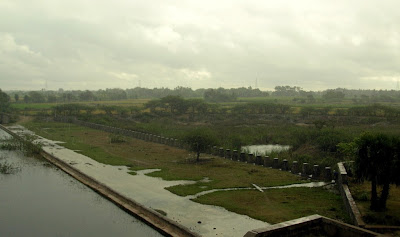 So this morning started normally but it wasn’t long after I’d arrived out at Karaivetti that I noticed that the clouds in the distance looked rather ominous. Sure enough, about fifteen minutes later the wind picked up and I experience my first rain here in India. I was under the impression that we were entering the dry season here…but rarely a squall will spring up and provide a brief respite from the ever climbing temps here. Luckily I was still by the covered observation tower (where I start my count) when the rain began. I shared the shelter of the observation tower with a couple of local fisherman who were also looking to stay dry. During my slightly longer than normal wait in the tower I was pleased to see a Cinnamon Bittern pop up out of the reeds and fly a short distance to a rice paddy before disappearing from sight again (here is a view of that reedbed from the tower during the rain). There are three species of bittern here; Yellow, Cinnamon, and Black and the view I had is about the only way you ever see them. With enough time spent here I should see Black Bittern eventually (the only one I have yet to see here). After a second rain shower had passed I thought it was safe to continue along the dike to my next stop…wrong! About halfway between the two points another squall sprung up and I got pelted with rain until I reached the relative shelter of a few acacia trees at my next stop. I waited out the rain here and noticed that much of the dry habitat that I had been finding things like Ashy-crowned Sparrow Larks in had transformed into mud. Several of the typical shorebirds were present like Wood Sandpiper and Red-wattled Lapwing. As I was watching a small group of “peeps” (birders nickname for a group of small, similar-looking shorebirds) fly in and briefly land before spooking as a Pallid Harrier flew overhead. I didn’t have a chance to get my scope on them, but they showed all the characteristics of Little Stints and this is by far the most common (and expected) peep found at this inland location. A little further along the dike I saw several species of bushlarks in a loose flock. In this group were many of the ubiquitous Singing Bushlark, 2 Indian Bushlarks, as well as a single Rufous-winged Bushlark! The Rufous-winged Bushlark is a new species for Karaivetti although it is one that Relton told me to keep an eye out for as it should be in the area. Continuing along I paused at my last stop by this lake and noticed that the receding water had left much of the area as very nice looking mudflats. There were already shorebirds utilizing this habitat and among them was a lone Kentish Plover. Just yesterday I was mentioning that both Little Stint and Kentish Plover should be found shortly as the habitat becomes more suitable for them. I didn’t realize how soon I would fulfill that prediction! 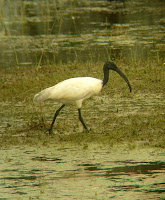 Several Black-headed Ibis also foraged in the mud and shallows (photo on left). As I was photographing the ibis I heard a White-breasted Waterhen (a type of large rail here) calling from the opposite side of a small channel that enters the lake. This is a fairly common bird here, but it is really shy and I’ve yet to get close enough to one to get a decent photo… I moved myself down the dike and trained my scope on the spot I thought the bird would appear from the vegetation and prefocused my scope and camera on the spot. As I’m looking through the camera I see a small rail land on the bank right where I was expecting the waterhen to appear! This is even better because there is only one small rail that has been recorded here (Ruddy-breasted Crake) and it is rare here! As I’m taking photos of this bird I know that it isn’t a Ruddy-breasted Crake because it is far too light colored. The bird is quite small (Sora sized) and has an all yellow-green beak much like a Sora. I know that my best bet for identifying this bird is going to be through the photos that I’m taking. Sure enough, three photos is all I managed before the White-breasted Waterhen that I knew was close popped out and chased the smaller rail away. The Waterhen of course promptly disappeared before I could get a shot of it, but I was more preoccupied with identifying the small rail now. As soon as I got the guide open I knew it was one of two, either Baillon’s Crake or Little Crake. I initially misidentified it as a Little Crake but once I got the photos up on my laptop and was able to look up how to separate the two species in the reference volume of Birds of India that Relton loaned to me, I was able to see that the all green beak made it a Baillon’s Crake. 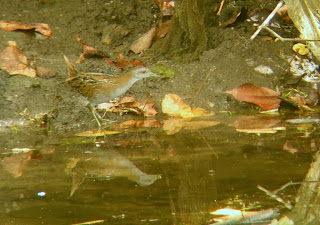 According to the range maps (which are far from accurate on many species - so to be taken with a grain of salt) there are no records of this species from the province of Tamil Nadu. It is only regularly found in the far northwestern part of India although its distribution across the rest of India isn’t well known. The probable reasons for why its wintering range is not well known are twofold; the lack of coverage by birdwatchers (they are few and far between in this country) and even in areas that receive some coverage, it’s inconspicuous and secretive by nature making detection even by birders low. 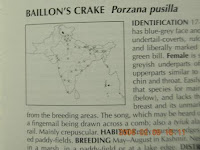 Here is the range map that I took a digital of…x’s represent rare records.
So, in summary, it is definitely a very noteworthy record, but if indeed it is the first provincial record for Tamil Nadu (which is possible), that doesn’t have quite the same punch that first state record’s have in America where coverage has been extensive for decades… Nonetheless it was my first crake species and definitely made my day more exciting!
The rain today actually cleared up the sky and for the first time since my arrival I was able to see the foothills of the Western Ghats in the distance today (photo). I will be spending this weekend up in the ghats on my days off! This is the other lake I survey on the way back to Pullambadi (where the Glossy Ibis were yesterday). 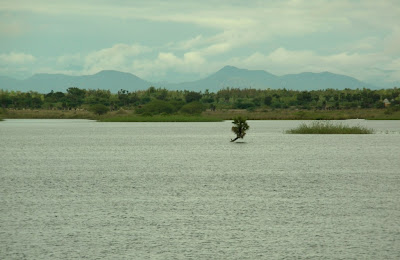 I’m actually posting this from the Relton’s blazing internet (all things relative of course) in Trichy. I’m using the opportunity of this internet and unimpeded power supply to not only get caught up with my blog (photos from yesterday) but also to search for my airline tickets to Bangkok as I now know I will be flying out of Trichy in early March. As I was leaving the school, the hostel boys (boys that actually live at the school so they are able to focus more on their studies) asked me if I was leaving for America. I laughed and told them that they couldn’t get rid of me that easily and that I’d be back Tuesday night. Alright sorry this post was dominated by birds…I got excited about the crake!
Posted by Sean Fitzgerald at 2/09/2008 09:01:00 AM