A visitor and 0-3 on the main attractions… 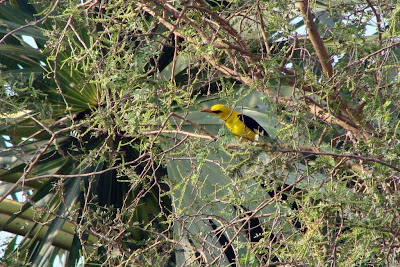 It’s days like this that make one pessimistic. Relton woke up very early and joined me for the survey today in order for him to see several of the unusual species that I have been seeing over the past week (Greylag Goose, Gadwall, and Baillon’s Crake). As my subject line indicates, we struck out on all of these species despite me being 4/5 and 3/5 over the past five days on the two he hadn’t seen in Tamil Nadu before (the goose and crake). I guess this just underlines the fact that one never knows what will see when you go out into the field. Perhaps this is part of the mysterious attraction that birders have to the hobby. I did use his local expertise to help me iron out the differences on the bushlarks that I have been struggling with and this was very helpful. All three confusing species were present today, thus giving ample opportunity to compare and contrast. The song and display flights are one of the biggest clues to the species.

Otherwise today was really a bit on the routine side (if you can species like the above Eurasian Golden Oriole routine…). White-browed Bulbul was a repeat, an Asian Paradise Flycatcher was a pleasant surprise, and we got a good opportunity to study (and photograph) a snipe near the observation tower while we waited for the greylag that never came… 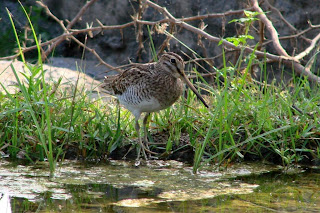 We decided that this bird is probably a Pintail Snipe due to the very wide buffy supercilium that is wider than the dark eyeline that comes out from the beak (yes this is one of the only differences between this and the very similar Common Snipe…yikes!). Snipe are usually very hesitant to allow close approach so I cautiously approached this bird under the cover of a stone wall until I knew I was within 20 feet of the bird. I then crawled on my hands and knees and actually stuck the camera around the corner of the wall without actually showing the bird any part of my body other than my trigger finger and found the bird using the large lcd screen on the Sony Cyber-shot. I wish someone could have taken a photo of me getting this photo because I felt pretty hardcore!

I also enjoyed the company of a native speaker as the amount of curious onlookers that felt the need to visit me was greatly dissuaded by the simple presence of someone who spoke Tamil… I also got to learn what may seem to be an intuitive lesson that exhaust pipes on motorcycles can get hot! We had taken a full size bike since there were two of us and the scooter I normally take is a bit underpowered for two men. I definitely have a nice souvenir on my right leg from my momentary lapse of attention. Yet another lesson learned; you won’t see me getting off the right side of a motorcycle again anytime soon!

I will be conducting the survey again tomorrow morning and then taking the bus into Trichy where I will depart with Relton and his family for the weekend at Point Calimere on the coast where we should see many waders.