Today I woke up at 3:30AM and gathered two days worth of clothes and my equipment and headed out the door of the Relton’s to meet the zoology students and the 25 passenger bus that was going to be taking us all up to the . We had gathered in the bus by 4AM and departed on time and the students were all very excited about going. I could understand this; trips like this aren’t the norm at Indian colleges so this was a treat for all the students involved. After about 15 minutes of unabated excitement and talking, I began to wonder when they would all quiet down and try to get back to sleep, like I had been attempting to do… Luckily, I had thought ahead and had fully recharged my iPod the night before, and I escaped into the familiarity of some of my favorite playlists. I was almost asleep when I was jarred awake by the sudden blaring of the radio. The boys had apparently convinced the driver that this was the ideal time to listen to the latest Tamil pop songs and to even sing along on some of the apparently more popular songs… Now I’m very open-minded about music, and honestly like almost every type of genre to some degree or other with the notable exception of heavy metal (my brother has even gotten me to like a couple of Hindi songs). This music I absolutely have no love for, and my best attempt at a description would have to be a three-way cross between bad rap (ie no skill whatsoever), low-grade pop music, and the third element being what I can only relate to the Islamic call to prayer (that type of wailing sound). It was about as sleep-inducing as…actually I can’t think of a single thing that approaches the antithesis of rest as this was… Anyway, luckily my brother had given me new ear-buds for my iPod for Christmas and they actually fit into the ear better and act almost like earplugs. This, coupled with me turning up the volume on my iPod to the point that it was actually hurting me ears enabled me to tune out some (not all…) of the racket that was the bus for the next 6 hours it took us to reach Topslip. 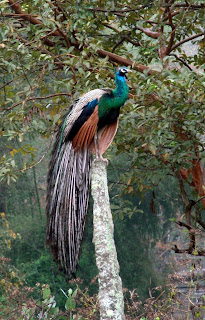 The birding was decent, but the constraints on birding there are high. You are not allowed to walk any of the trails without a local forest-service guide accompanying you. There actually is a fairly high danger of being mauled by a Gaur (Water Buffalo), a smaller chance of being bitten by a venomous snake, and a miniscule chance that a Tiger may attack you. So yeah, good reasons for having a guide accompany you, but rather annoying when I can’t get into the habitat that is home to so many endemic birds. I did manage to see quite a few birds during the trip, including 11 new species for me (lifers). Not bad, considering I was with a group of very loud Tamil Zoology students who were on (believe it or not) their first ever trip into the jungle to look for wildlife… The best birds of the trip were definitely the nocturnal species that I saw while we were out at night with spotlights driving around looking for mammals. A Spot-bellied Eagle Owl was by far the highlight. This species is rare and not nearly as active at dawn and dusk as many of the other owl species. Relton said that he has seen a grand total of two in his 20+ years of birding, so I definitely feel extremely fortunate to have seen this species. Other nocturnal species I added included the Brown Fish Owl, Jungle Owlet, and Indian Nightjar. The other species I want to mention was the Brown-backed Needletail, an enormous swift that is literally the size of a nighthawk that I saw twice as it swooped in low over the canopy. I’ve seen the White-rumped Needletail before which is about the same size as most of the swallows and swifts, but this species was so huge that I was very impressed by it. I wasn’t able to get many photos of birds up in the due to the light conditions or the speed in which the birds were gone… Relton had loaned me his brand new Sony Cyber-Shot camera that is quite nice (and has a very respectable 12x optical zoom) for the weekend and I was excited to try it out on some of the birds up in the . I managed to get photos of a few interesting species as well as a nice shot of a male Indian Peafowl that was perched on a post near the Kerala border (photo above).

The only endemic bird I managed a shot of was a Malabar Parakeet that was feeding a young bird in the top of some Bamboo (photo on right). Very striking birds, the black beak on the young birds is diagnostic for separating it from the similar Plum-headed and Rose-ringed Parakeets. We also

saw a Grey-headed Fish Eagle at a reservoir up at elevation in Kerala (photo on left). This species is extremely local in the Western Ghats and there are probably just a few pairs that are present in the entire mountain range (they are more common in NE India and they range into as well).

I also enjoyed bumping into a few Australians and a group of five Polish birders who had just arrived in the . It was fun for me to talk birds with some hardcore people and give them a few suggestions for their next few days.

By the way, beat in Cricket at for the first time in twenty-some years on Sunday! I was watching the game with Relton, Daisy, and Alan (their son) and their excitement rubbed off on me a little! is the reigning world champion in cricket, so an enormous upset…

All for now, I’ll leave you with a view of the reservoir (that the previously mentioned fish eagle was at) in Kerala at dawn on Tuesday…oh yeah it was nice and cool up in the mountains too! 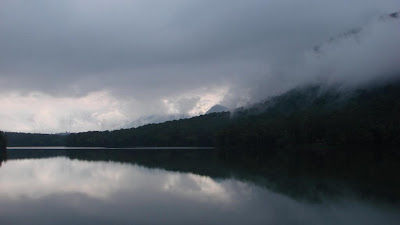