Unfortunately, when I wrote last night that my camera was functional, I was incorrect. Everything appears fine on the lcd screen but when I take photos it records the photo but it appears extremely overexposed and white. I tried changing aperture and shutter speed without any effect. So that’s the bad news… The good news is that the video function of the camera works fine. So I can take videos and upload them onto my computer without issue. The quality of the image is not as good and even if I capture a still from the video it will not appear nearly as good as an image taken as a still… So it looks like I will need to get a new camera if I want anything more than a small video camcorder… Due to my internet connection here I will not be able to upload any of the videos I take even though blogspot does have the capability of hosting videos. 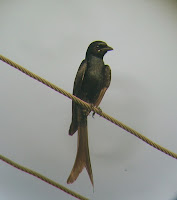 I guess I will continue bringing Mr. Devadass’s digital camera which isn’t nearly as suited for digiscoping, but can at least document things. I played with his camera a little bit the last three days and had some okay results (the Common Kingfisher, Indian Pond Heron, and Black Drongo are with his camera). It is much more difficult to take photos of birds that are more active and that are farther away. I’m restricted from using the optical zoom on the camera because the vignetting (the black circle of the scope – see example) is too prevalent making it impossible to salvage those shots. 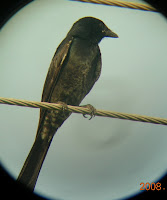 Oh well, I have to make do with what I have.
The survey was not nearly as exciting bird-wise today. Most of the waders from yesterday weren’t present today. I’m not sure where these birds go, I suspect that there are many areas back behind the rookery trees that contain good shallow water right now and many of the birds are back in those inaccessible spots during my survey. The best birds of today were probably a Greater Painted Snipe that I saw at the same muddy pond that I had many of the snipe at yesterday. Painted Snipe are one of the very few species in which the female has the brighter plumage and the male is dull and broods the nest and raises the young (Phalaropes and Dotterel are two other types of shorebirds that are polyandrous, the term for these characteristics).

I have one photo (right) from last year of a male (the dull one…sorry) Greater Painted Snipe. Other than that it was pretty quiet. I observed another subadult Watercock at a different location this time. The overall diversity was a bit lower 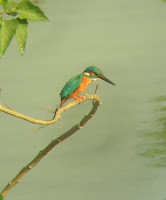 today but three of my last four visits I’ve seen over 100 species of birds there, so when I say diversity is lower that’s very relative. Especially considering there are only a couple of spots in the US where you could see over 100 species at one location in 4 hours at this time of the year… Two more days of surveys and I will then be accompanying a Bishop Heber College zoology class trip up into the Western Ghats for two days. I’m looking forward to another chance to see many of the birds there. I only had a couple of days up there last year and that is the most endemic-rich (species that have a very restricted geographic range) area in southern India, so I’m looking forward to experiencing it again.
Every night as I spend the hour+ it takes for me to just check my email and post this blog on the dial-up connection my host’s sit in the room next and watch TV. I can’t help but overhear much of what is on the TV. The music that is selected for airplay I find rather humorous. I’ve heard everything from 50 Cent (Window Shopper), to Britney Spears (Toxic), to Shakira (Hips Don’t Lie). I asked them if they understand any of what is being sung about, and they honestly have no clue what is being said! They just like the beat and watching the videos…
Tomorrow morning I’m going to get up earlier as it is taking me a little over an hour to get there since I stop and check several of the ponds (that have been producing good birds). Hopefully this will yield me more time at the sanctuary during the more “birdy” portion of the morning.