The relative nature of rarities…

Today I almost messed up. No, I didn’t almost fall in the lake again, or drive over more thorns, or…you get the point. I almost missed a pretty rare bird due to me lapsing into the familiar swing of the survey. I had reached the first transect point (a little late due to some gastro-intestinal issues that have arisen…) and I had sat down on the concrete wall by the tower to eat my breakfast of bread, butter, jam, and a banana that Carolyn had kindly packed for me (as she does everyday). I was feeling a little out of it to begin with, and then the local workers (I call them this despite me seeing them do much work ever…) approached me wanting to look through my scope (as usual). I obligingly lowered it for them and they chattered in Tamil about the birds (at least I think that’s what they were talking about…) while I sat there drinking water and waiting for them to move off so I could actually count the birds that were there. As I was sitting there, I heard the distinctive low-pitch, almost nasal honking of approaching Bar-headed Geese. I turned to count the flock and immediately noticed that it was the largest single flock of Bar-headeds that I had seen yet and I got out the new camera that Relton had loaned me (for the remainder of my stay!) to test out the 12x optical zoom and get some nice shots of the geese in flight. After I took a couple of shots the birds were getting too far away and I went back to counting them through my bincos. It was only at this point in time that I realized that there was a different species of goose in the flock! Now, I got excited because I knew that none of the other goose species that occur in India are supposed to be here besides Bar-headeds and I quickly brushed aside the local who was on my scope and got the scope on the bird just long enough to tell that it was a Greylag Goose (the most likely of the brown-backed geese to occur here as it makes it as far south as Mumbai regularly – about 700 miles to the northwest) before the flock disappeared behind the rookery and landed out of sight. At this point I thought I may have inadvertently captured the Greylag in my earlier photos of the whole flock, and I checked on the camera only to find the first shot too blurry and the second shot I wasn’t able to pick it out on the small screen. Upon returning to Pullambadi and uploading the photos onto my laptop I was able to see that I did actually catch the Greylag but the quality is quite low due to the distance and the amount of cropping I had to do… Here is the original photo of the flock

and followed by the cropped version 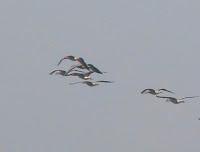 (fourth bird from the front, with darker brown back and wings…tough to tell, I know). I got to thinking about how I immediately got excited about the fact that the bird was unusual here despite the fact that I have seen hundreds if not thousands of this very same species in the UK just last March (I actually have two photos of one from London on my blog here - 1, 2). A recent blog post by a birding friend of mine back in talked about this issue and I think he’s right on the money. It’s the unfamiliarity of a species in that area or to a person that makes it all the more noteworthy. Whether it’s someone who visits a new continent and everything that is seen is literally new to them, or someone who birds an area frequently but has never seen a certain species there, that same feeling of excitement occurs during both situations. So yeah, that’s just some of my musings from here in Pullambadi this afternoon…

Other interesting birds seen today included a lonely looking male Tufted Duck (remarkably my first of the survey…thousands were here last January), 12 Black-tailed Godwits, 2 Yellow Bitterns in reedbeds on the outskirts of a nearby village, my first sighting of a Common Woodshrike this year, and a couple of different plumages of Yellow Wagtail (very sharp looking birds…the camera batteries died as I tried to photograph one that was close…I’ll keep trying). And here’s a nice shot of a male Pied Bushchat that wouldn’t have been possible without the help of the 12x optical zoom on Relton’s camera! 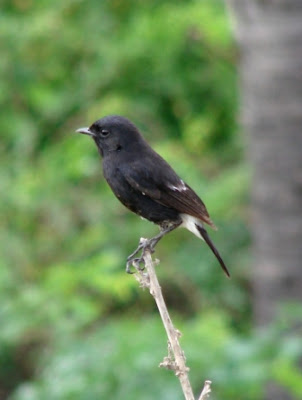