Everything went according to plan today, which was refreshing. The birding was a little slow, with the best bird probably being several Streak-throated Swallows among many Barn Swallows and House Swifts. I also saw (and heard) not only one but two different individual Citrine Wagtails today. One I think was the same bird as on Sunday (probably a 2nd year male). The other bird looked very similar but had a darker auricular patch on the otherwise yellow face with dark edging coming up the nape with a dark back. I think this may be either a female or 1st year bird. An Alpine Swift was seen again today, possibly the same individual as two days ago. I also had my first good opportunity to compare Baya and Streaked Weavers today. An okay photo of a female Streaked 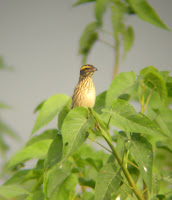 is all I can offer from my “bank” of photos I had stored up prior to my camera getting wet. The female Baya is a much plainer faced and paler color than the more heavily streaked female Streaked Weaver. The males are easier to tell apart as the Baya has extensive yellow both on the crown as well as below the dark mask or bib. The male Streaked Weaver only has yellow above the dark mask and has heavy streaking on the breast. They both occupy reedbeds and tall grasses in wet areas, but the Streaked Weaver is much more common at Karaivetti. The water levels are definitely going down rapidly. Relton tells me that by the beginning of March congregations of the large waders like storks and spoonbills will be extremely high due to the shallow water and trapped fish. Large flocks of northbound shorebirds stop in during that time too.

This afternoon I spoke to the teachers at the K-12 “Standard” (instead of grade) school that I’m staying at. Mr. Devadass had originally asked me to speak briefly to the older students for one day so they could hear how odd my English sounds compared to what they have learned and heard. He later expounded on the expectation by saying that I should have something prepared to talk for 30-45 minutes! Apparently in the definition of “briefly” differs from the meaning of the word in ! Today as I gathered some dollars, coins, airline boarding passes, and my drivers license to show the students I went down and asked him if it would be acceptable for me to do that. He said, oh well maybe that would be better for next time, and he stated his intention of making this into a sort of series of talks I will give as I’m here for another month! Changing expectations, and I actually find it kind of amusing to see their reactions to my pronunciation of many of the words (for example it took me over a minute to figure out that they were saying Ambassador as in the British type of car that is common on the streets here…). They pronounce Algae the way it looks instead of al-gee. So a long story short, I will be the guest speaker for grades 6-10 for the next month in a series I’m entitling, The Rise and Fall of Imperialism in Western Culture…ok just kidding but I’m not sure what I’m going to talk about for this many sessions… The talk with the teachers went well. I then demonstrated how to use my scope in the yard later and teachers and students alike lined up for looks at Indian Roller and a flock of Barn and Red-rumped Swallows on distant wires. 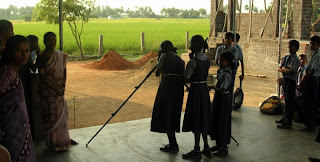 I also got to catch the second half of the Manchester United football match this afternoon. Nice to hear English that I could follow easily! 120 rupees a month ($3.15) for the complete cable package here…wow.

Alright, I’m holding off attempting to turn my camera on for another day of roasting in the sun on the roof. The cell phone still has visible condensation inside the screen, and while the camera doesn’t have any condensation visible any longer, if the cell does, I’m thinking that there could be some residual moisture deeper inside the camera. No since rushing it if it has a better chance by waiting an extra day…