A trio of novelties

Today I got a slightly earlier start and succeeded in being out in the field during the much more productive early morning hours. I was rewarded for my lack of sleep and saw several species of more crepuscular (dawn and dusk) birds that I had not seen thus far during my time here. The first of these species was the Black Bittern, a species that is supposedly more common than both Cinnamon and Yellow Bitterns which, in total, I have seen on five occasions now! The reedbed on the outskirts of one of the villages I drive through had a whole host of terns, egrets, pond herons, cormorants, and jacanas swarming the small pond and among this swarm a pair of Black Bittern circled before dropping into the reeds shortly after I’d spotted them. I did get a couple poor photos of them flying, but they aren’t good enough for me to put on here. Continuing on I reached Karaivetti and flushed a Ruddy-breasted Crake from the shallow area where I’d seen baillon’s crake last week. This is the crake that I’d been expecting, although it is by no means common so I was glad to finally get at least a glimpse of it. The water level seems to have stabilized, thanks in part to the rain we received on three different days last week (very odd for the dry season here), but also due to the fact that one of the outlets of water has been closed since the rice is being harvested and the farmers do not need the water for irrigation any longer. So there is less outflow of the water. That channel is also very productive for waders and kingfishers right now as the receding water in the channel is leaving many fish without anywhere to go! I had parked my moped quietly and was sitting there taking some photos of a Common Kingfisher that was perched nice and close. I saw a White-breasted Waterhen climbing through the Acacia tangles about 10 yards down the dike and readied my camera for a photo of this very common, but extremely uncooperative species of rail that I still don’t have a single image of… As I was waiting with the camera pre-focused on the clearing where I thought the waterhen would appear, what walks out but two rails that are definitely not waterhens! As I saw them I knew what they weren’t (immature waterhen, ruddy-breasted crake, baillon’s crake, immature moorhen) and knew it had to be something good so I was fortunate enough to get two photos of one of the birds before they disappeared into the tangles that I was expecting the waterhen to come out of. They were shortly followed by a Grey Mongoose 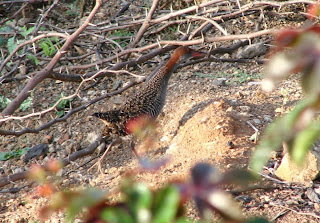 that didn’t pause long enough for me to take a pic. I was able to review the photos immediately and identify the rails as Slaty-breasted Rail (photo on right), another species that is not shown to regularly occur in Tamil Nadu (3 x’s signify some prior records), but in the text it is listed as a widespread resident. Either way, it was another new species for me as well as a new species for the Karaivetti list (#205 for those who are interested)! During my review of the photo I glanced up just in time to see the ever-elusive waterhen fly across the gap and evade me again… One of these days!

Upon reaching the observation tower where I officially start my counts, I wasn’t overly enamored to see the same local who speaks zero English come up and expect me to let him look through the scope and my binocs (I’ve not been allowing anyone to look through my bins as accident avoidance…I don’t want to have to use my backup bins that I brought!). It is becoming a little bit annoying to have the same people, everyday, come up and emphatically say things in Tamil that I have zero comprehension of, and expect me to make some progress on the language. Call me the stereotypical ugly American if you want, but I really don’t have much use for Tamil and after I leave here in 3.5 weeks I will probably never meet another person who speaks it! Don’t get me wrong, I’m all about cultural expression and I need to work on my foreign languages, but for me that is Spanish, a language that I can use throughout 90% of central and south america not to mention Spain… Anyways, after I attempted the ignore him tact for about 10 minutes as I scanned the duck flocks (composed of species like these Spot-billed Ducks),

I decided that I should just let him look through the scope (again) and hopefully he’d move on after that. I also hate to be rude to the local people who I’m seeing regularly who may end up helping me out if something happens… But yeah, I’d love to go one full morning out there without having to lower my scope for someone and wait the ten minutes it takes them to tire of it…

I waited longer than usual at this stop in an attempt to see and photograph the Greylag Goose again. The Bar-headed Goose flock arrived to roost later in the morning today (9:05AM) and they surprised me (again). I was scanning the distant acacias for raptors when I heard a honk and the geese were already half way across my field of view. I scanned the flock and relocated the Greylag and had better looks at it today, but by the time I got on the bird it was too distant for me to photograph.

The rest of the survey went well, and I’m enjoying playing with the zoom lens on this camera. 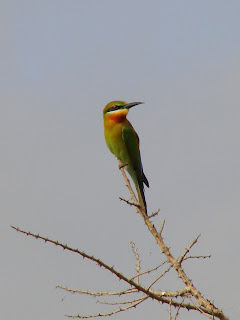 Here’s a Blue-tailed Bee-eater that posed nicely for me this morning (on the left). Oddly enough, today was the first day since the start of the count that I didn’t record any of the migratory wagtails though (the resident White-browed were it).

I was the guest speaker this afternoon for grades 8-10 at the school. I threw together a little powerpoint with some pix of me and my family and gave them my background as they tried to absorb my accent. It went fairly well, many of the questions they had for me were a bit difficult to decipher though (Ex. How do you pick India? Or What Indian cultures you like?). I honestly just took the theme of most of the questions and did my own thing because getting the students to ask questions of the tall scary american man who talks funny was like pulling teeth!

Also, I had the not so fun experience of taking a dime-sized beetle up my left nostril this morning during my drive in to the sanctuary. Yes it barely fit, I’m just glad it wasn’t smaller or it wouldn’t have been stopped by my nose! Also had a near miss with a 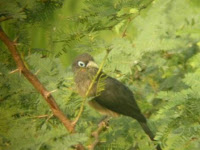 Blue-faced Malkoha (close relative of the old world cuckoos) this am…most have missed my face by an inch… The endemic bird is freaking awesome looking (best photo I’ve got on right), but I don’t think I would have enjoyed seeing one that close!

a dime sized beetle and a Tamil speaking native. Not sure which'd be worse ...

You'll have plenty of speech material for the eighth grade classes in America, when you return.

And they'll understand your English.