Ever since starting this survey I’ve been bothered by the checklist that has abundance designation codes by each species name. There have been several species that are listed as common that I’ve been unable to locate. Specifically, these birds are; Glossy Ibis, Common Pochard, Tufted Duck, Kentish (aka Snowy) Plover, Little Stint, Rock Pigeon, Barn Owl, Spotted Owlet, Indian Nightjar, Rosy Starling, House Sparrow, Red Avadavat, and White-rumped Munia. Now the two diving duck species I saw when I was here last year and I’m of the opinion that they have already migrated north. I may get a tardy individual among a flock of wigeon or something but I haven’t been too concerned about them. The two small shorebirds are due in the coming weeks as more suitable habitat becomes available to them. I’m already seeing small numbers of the larger waders beginning to come through (a flock of 24 Common Greenshank were seen today). The Barn Owl, owlet, and nightjar are all more nocturnal species so I have not expected to locate them as readily. I’ve quite frankly been enjoying the absence of Rock Pigeons and House Sparrows here! Even though House Sparrows are declining here, it is difficult for me to get excited about this species due to the myriad of problems it has caused native cavity nesters in North America. The avadavat and white-rumped munia are both species that are associated with reedbeds and they are easy to miss, so I’m sure I will turn them up sooner or later. This leaves two species of bird, the Rosy Starling and Glossy Ibis that I’m not able to explain away why I’ve not found them yet. Well, today I finally did see a flock of 34 Glossy Ibis at the other lake I survey near Karaivetti (pictured in flight above), so hopefully I will be seeing them regularly now. The Rosy Starlings I’m not sure about. 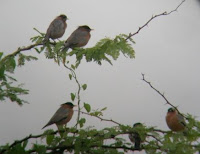 I’ve actually been seeing the (supposedly) rarer Chestnut-tailed Starling at multiple locations four out of the last five days. Rosy Starlings absence is a mystery to me, I’m definitely checking all the Brahminy Starling flocks (photo from last year…really stunning plumage on these guys) but thus far without success.
I managed a few decent photos with Devadass’s camera (Nikon Coolpix 4800) today. One is of a 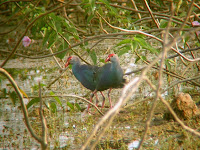 pair of Purple Swamphens that are foraging on recently exposed vegetation. The other is of a Little and Intermediate Egrets lined up along the dam at the east end of the lake. This photo is actually rather deceiving because it makes the Intermediate Egret look much larger than the Little Egret. 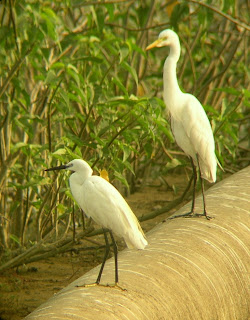 This is definitely not the case and I would say that the Intermediate is actually only slightly larger, but in the photo the Intermediate is stretched out and the Little is hunched down. The best way to separate Intermediate from Great Egret is by its stockier, black-tipped beak, the gape line doesn’t extend beyond its eye either, and by the shorter neck. From a distance it can be more difficult to separate the two though.

Oh yeah, best bird of the day was actually a new species for the sanctuary, a Lesser Whitethroat. Not unexpected, this bird is found in scrub habitat and is a Sylvia warbler. It’s one of those species that Relton expected me to turn up with regular coverage as infrequent surveys are much less likely to turn up inconspicuous species such as this.

I’ve enjoyed reading the newspapers here as they have a very different slant on world events than I’m accustomed to hearing in the . “Super Tuesday’s” results were actually front page news here yesterday. It was very difficult to explain the intricacies of the electoral system that is our political system to my hosts… The newspaper’s coverage and description of events did an excellent job of describing the significance of everything and each candidate’s relative position now. Much of the international news is syndicated from The Guardian though which explains the slightly British twist on some of the stories.

Yesterday evening we discussed “developing” vs. “developed” countries and I was asked how long it would be before would be considered developed. I laughed and said that as long as open sewers are the norm, rolling brown outs are expected instead of being exceptions, and it takes 8 hours by car or ten hours by train to travel the 330 km between cities like Chennai and Trichy here in Tamil Nadu, they will have a hard sell of billing themselves as developed to the rest of the world. He did state that they are making a large improvement and are in the midst of constructing four lanes between those two cities! They couldn’t believe that ten lanes are not uncommon in some large cities in . I will admit that it is challenging for me to explain why striving for that kind of infrastructure and affluence isn’t necessarily a good thing. It’s hard to extol the virtues of conserving resources and cleaning up their pollution when is using more of the world’s resources per capita than anyone else in the world. They are just trying to follow ’s example… Alright, sorry to steer into the realm of the political; it’s tea time.