Déjà vu and an expensive swim…

Today was one of those days that you look back at and think to yourself…”What was I thinking!?” It began innocuously enough with the morning coffee and 13k commute in to Karaivetti. As I got half way around the lake I felt the steering start to get mushy, and sure enough, the front tire was losing air this time around (and for those who think I’m just negligent about checking the pressure, both tires were filled yesterday at the gas station). Ah well, I know the drill now, I’ll park the bike in the shade, use the morning hours to bird and then walk it into the nearby town where the two men who helped me last time had taken the tire to. I walked the other half of the lake since covering it on foot yields higher counts of many of the songbirds that I don’t notice as I ride between stops. The walk was going well; my constant checking of every

bushlark yielded a new species for the sanctuary, Indian Bushlark (198), among the many Singing Bushlarks (Singing Bushlark on left) that perch along the gravel dike around the lake. Relton also called me and told me that the photo that I had emailed him last night of the wagtail 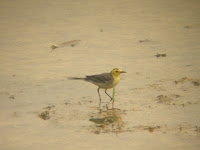 I was unsure of was indeed the Citrine Wagtail I had hoped it was, another new species for both me and the sanctuary (199 - on the right). Today I saw a few noteworthy waders flying around out by the rookery of all the grey herons, storks (mostly Asian Openbill - 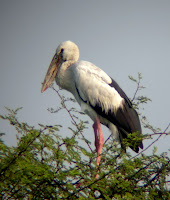 left), and cormorants; Black-crowned Night-heron, a species that is regular here that I had somehow not seen yet, and a single Wooly-necked Stork, less common but not unexpected considering the congregation of waders here. I crossed the stream on the far side of the observation tower and the tree on the far side of the streambed contained a flock of 12 Chestnut-tailed Starlings, very unusual here – more common in the hills. I continued down the road and saw a Little Heron (aka Striated Heron) along one of the ditches, uncommon at this inland location as it is typically a mangrove-specific species. It was beginning to heat up at this time (10:30AM) so I turned back towards the moped so I could go get the tire fixed and return to Pullambadi. On the way back I saw one of the locks that diverts water from the lake into channels that irrigate the rice paddies in the area. There were a series of concrete steps down to the water and then the cement continue out in the water with maybe 3 inches of water over the cement. I had the great idea that it would feel really nice to cool my feet off by stepping out on the cement ledge. So yeah, tropical lake, probably fairly warm water, a large amount of algae is probably a good bet = highly slippery. I took my sandals off and stepped out with all my gear still around my neck, scope/tripod on my shoulder, backpack on, etc and realized too late that I had no traction and was going down. My damage control kicked in and I had the sense to grab my brand new binoculars from my neck and hold them over my head and tip my tripod so that the scope was above me as well as I entered the five foot deep water next to the cement… Even as I was saving my binoculars and scope I instantly thought of my brand new Nikon Coolpix P5100 that I had in the cargo pocket of my shorts that were now two feet under water. You’ve never seen anyone get out of water faster and I instantly had my camera battery, memory card out and on rocks in the sun and wind drying out. I also realized that my cell phone for here in India was in my other pocket as well as my wallet and passport in my opposite cargo pocket (in case I’m hassled by police as I don’t have the international drivers license that is technically required to be doing what I’m doing…). I had all my gear out and drying and I decided to wait as long as possible before moving on in an attempt to save my camera. After two hours, I decided that they were as dry as they were going to get without a prolonged baking in the sun (which I was maxing out from the amount of sun I was getting…sun screen was applied but I didn’t have the water reserves required to sit out in the sun all afternoon. I packed up everything and kept the cell and camera out so they continued to get sun as I walked back to the moped. My troubles weren’t done of course as the front tire hadn’t fixed itself during the ensuing 3 hours since I had left it. It took me about 30 minutes to walk the bike to the shop which was on the far side of the nearest town (of course). My entry into the town was rather humorous to see I’m sure. The children from the village came out in droves to see the strange tall white man walking his moped through town. I think I know how the pied piper felt… In this rural village, the most English any of the kids knew (none of the adults knew any) was “Come on”, “puncture”, and “How is your name?”. The tire was mended and at this point I tried to see if the cell phone would work even though there was still condensation on the inside of the screen…no dice. I ended up returning to my host’s home at 2:45PM, 2.5 hours past when I’m supposed to be back. They were gratifyingly worried about what had happened and why my cell phone was turned off. Good to know that if, by some, one-uping, sadistic twist of fate, I were to not only have a flat, take an inadvertent swim (rendering my cell useless), and then as I’m drying off be bitten by a King Cobra, that someone would know I was in trouble! Today truly felt like a comedy of errors…I have not attempted to turn my camera on yet, I have it on the roof of the building pointed towards the sun baking. I could really use a miracle as I’ve owned this camera for less than two weeks. Ah, I hope to God that I will not have as an eventful day to write about for the rest of my stay here…
Posted by Sean Fitzgerald at 2/04/2008 10:57:00 AM

Wow dude- you and your electronics always seem to find a way into trouble! Hope it comes back to life.

Also as a side note I noticed that Citrine Wagtail (according to Alstrom and Mild) should not occur as far south as where I think you are, so it may be a noteworthy record!