The view that greets me along my morning commute… 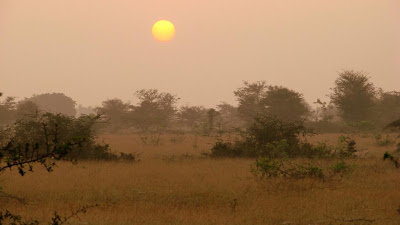 This morning I had the good fortune of relocating the previously mentioned Greylag Goose in the midst of 147 Bar-headed Geese (my highest count of Bar-headed’s yet). Relton unfortunately was unable to make it out to accompany me on the survey (and hence I didn’t get a chance to bird the nearby grasslands for previously mentioned specialties…). So he missed out on seeing this regional rarity. I texted him when I relocated it and he communicated how important it would be to get good record shots of the bird so it would be accepted by India’s scientific bird community. Well luckily for me, the geese all decided to land on the north side of the sanctuary in view of the observation tower. Normally they overfly me at this location and land among the heron/stork rookery which is at the limit of what I can identify through my scope. So I had more opportunities to get some photographs than the usual 10 second fly over that the geese had given me on my two prior chances of documenting the bird with a photo. I tried using the digital zoom on the Sony Cyber-shot (19x) but after reviewing those photos the results were quite poor. I also tried using the Nikon Coolpix point and shoot camera that Devadass has that I intentionally have been bringing along just for situations like this. This is where digiscoping has a definite advantage over the more limited optical zoom cameras like the cyber-shot. Using my scope, the point and shoot camera was able to derive a much higher quality image of the distant flock. This is incredibly valuable for birders so they are able to document many species of birds adequately that would be impossible without enormous telephoto lens with an SLR camera.

All this being said, the flock of geese began slowly swimming out and getting closer to me so I decided to wait and get the best image possible since my first attempts were still rather abysmal. My patience was rewarded and the flock got maybe 25% closer and my best result is definitely identifiable to Greylag (although still not a photo that I’d normally be happy with!). But, this is a perfectly fine “record shot” which substantiates my single-observer report of this species here (normally not as highly credible as reports seen by multiple observers).

Meanwhile, the better percentage of my morning had elapsed while I waited for the geese to approach and I now didn’t have nearly enough time to thoroughly conduct the rest of my count… I made do and tried to cover as much as I could with the time I had. It also was much hotter at each stop than normal due to the sun being quite a bit higher in the sky; this had a negative effect on the amount of birds I saw too. I still ended the survey with 108 species, only slightly below my last 8 visit average of 110 species (my species total has increased as I’ve learned more of the local bird calls that I don’t necessarily see every time). The only other highlight for today was probably a flock of ~80 Black-tailed Godwits that circled the lake several times before heading north.

several species of birds that have been eluding me, namely Bay-backed Shrike and Hoopoe. I got an okay photo of a Bay-backed Shrike (left), poor photos of hoopoe (and white-breasted waterhen…finally!), and some nice bonus photos of some extremely cooperative Red-rumped Swallows that let me approach to within 20 feet (below)!

The attendant at the gas station 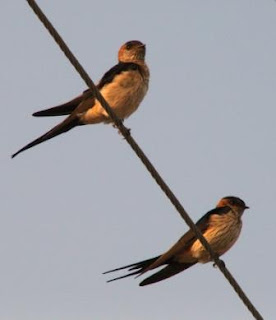 that I’ve been regularly frequenting has begun to ask for a tip from me when he fills the tires of the moped with air. It’s not a big deal at all and I had offered it the first couple times that he filled them but he had emphatically refused saying that it was complementary. I’d even talked with the owner of the station and he had also told me that it is free. Yesterday the youth was quite belligerent with me about demanding a tip. Perhaps that sort of attitude is rewarded in (I tend to think that it probably isn’t) but it definitely had the counterproductive result with me. I told him that if he wants a tip he shouldn’t ask for one and drove away. We’ll see if he understood what I meant next time…there’s 2 rupees riding on his attitude!